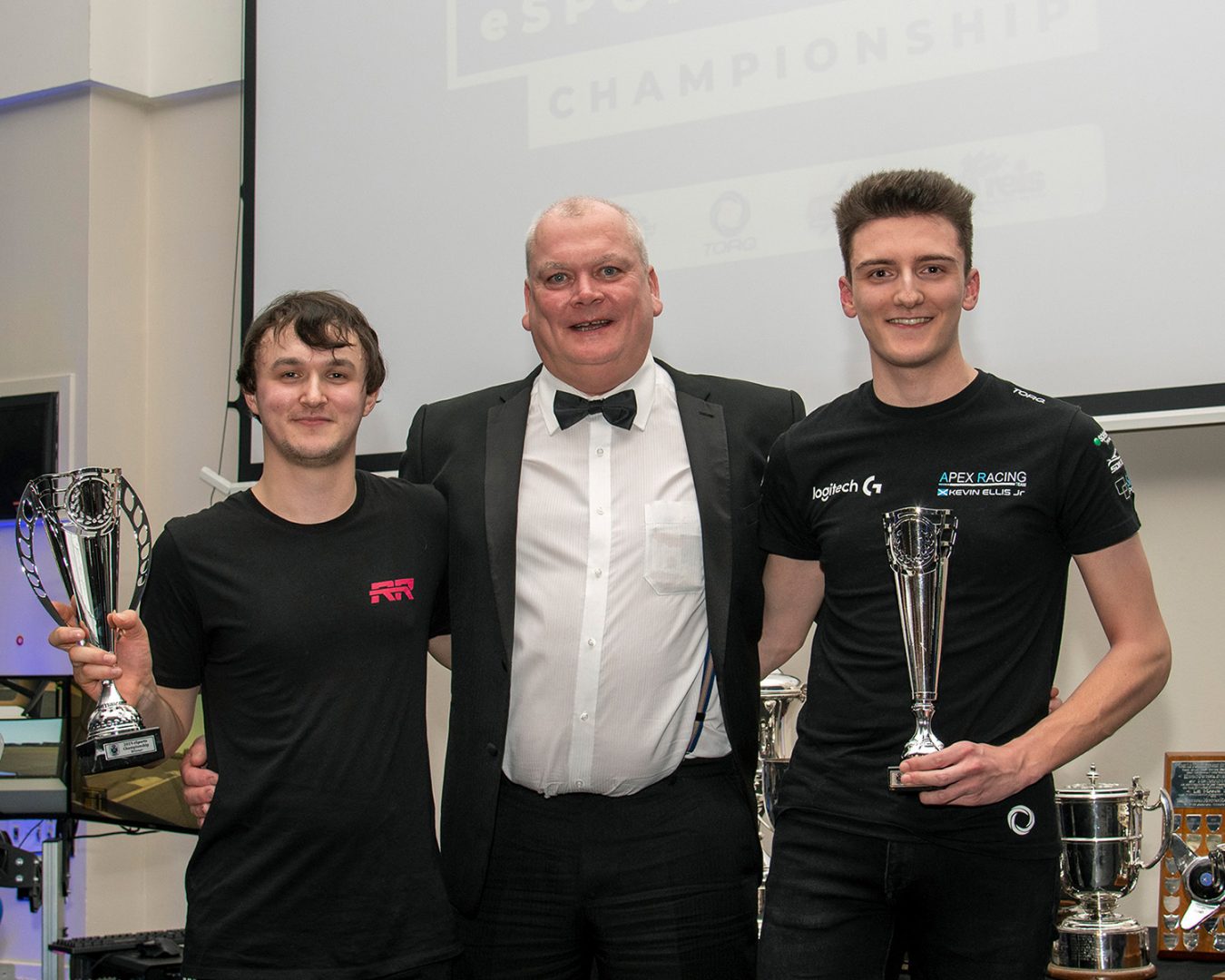 The grand finale of the inaugural SMRC Esports Racing Championship took place on the 23rd November at our annual awards dinner in Glasgow between Sam Corson and Kevin Ellis.

Both drivers had fought hard to earn their place in the final, having scored well in the 4 online qualifying rounds and made it through the intensive semi-final at Knockhill Racing Circuit earlier this month (full semi-final write up here).

However, the toughest challenge was yet to come as the drivers faced the most intense race of their life on front of over 300 people. Both drivers would battle it out on stage in identical simulators for their chance to go from virtual to reality and win the star prize of a fully funded drive in the opening round of the SMRC Scottish Legends Cars Championship.

The prize has been made possible thanks to a number of partners; Andrew Donald at Scottish Legends Cars, who is providing the car and team support. Reis Insurance, for the insurance. Torq racewear for the use of suit and gloves and Knockhill for the ARDS test. In addition, the SMRC have provided an ARDS test for the runner up.

A 5-lap sprint race around the Silverstone National circuit stood between the drivers and the prize, with commentary from BTCC Pundit Paul O’Neill and Red Bull Esports driver, Graham Carroll. Having taken a clean sweep of pole positions and wins in the qualifying rounds, Kevin Ellis was the clear favourite for the win.

However, the race turned out to be anything but predictable. Underdog Sam Corson taking the lead off the start as Kevin Ellis struggled to get off the line. Having dropped a few seconds, Kevin slowly started to chip away at Sam’s lead. As the drivers went into Luffield corner on the last lap Kevin was all over the back of Sam’s rear bumper. But Sam held his nerve to take the win and become the first ever SMRC Esports Racing Champion.

“What a weekend! It was so intense, but I managed to stay calm and hold off Kevin to take the win. Massive thanks to SMRC, Scottish Legends Cars and everyone involved for this amazing opportunity. I can’t wait to get behind the wheel for real next year!” Sam Corson

A surprise outcome but it wasn’t quite over yet. Having witnessed the misfortune of Kevin Ellis, team owner at Burnett Motorsport – Steve McCall – offered Kevin the use of one of his cars for the first round of the season, so that he too can battle it out with Sam Corson in the real world!

Commenting on the news, Kevin said:

“After the Semi-Final, Sam tapped me on the shoulder and said “grats on the win!” I told him there and then that anything could happen in the Final and to never give up. And that it did! With massive thanks to Burnett Motorsports I have still been granted the opportunity to compete at Round 1 in 2020. Massive thanks to the SMRC for creating this initiative. I look forward to getting behind the wheel and making the most of this opportunity.”

Watch out for updates on both Sam and Kevin’s progress in 2020. In the interim, thanks to the event partners who have made this competition possible.