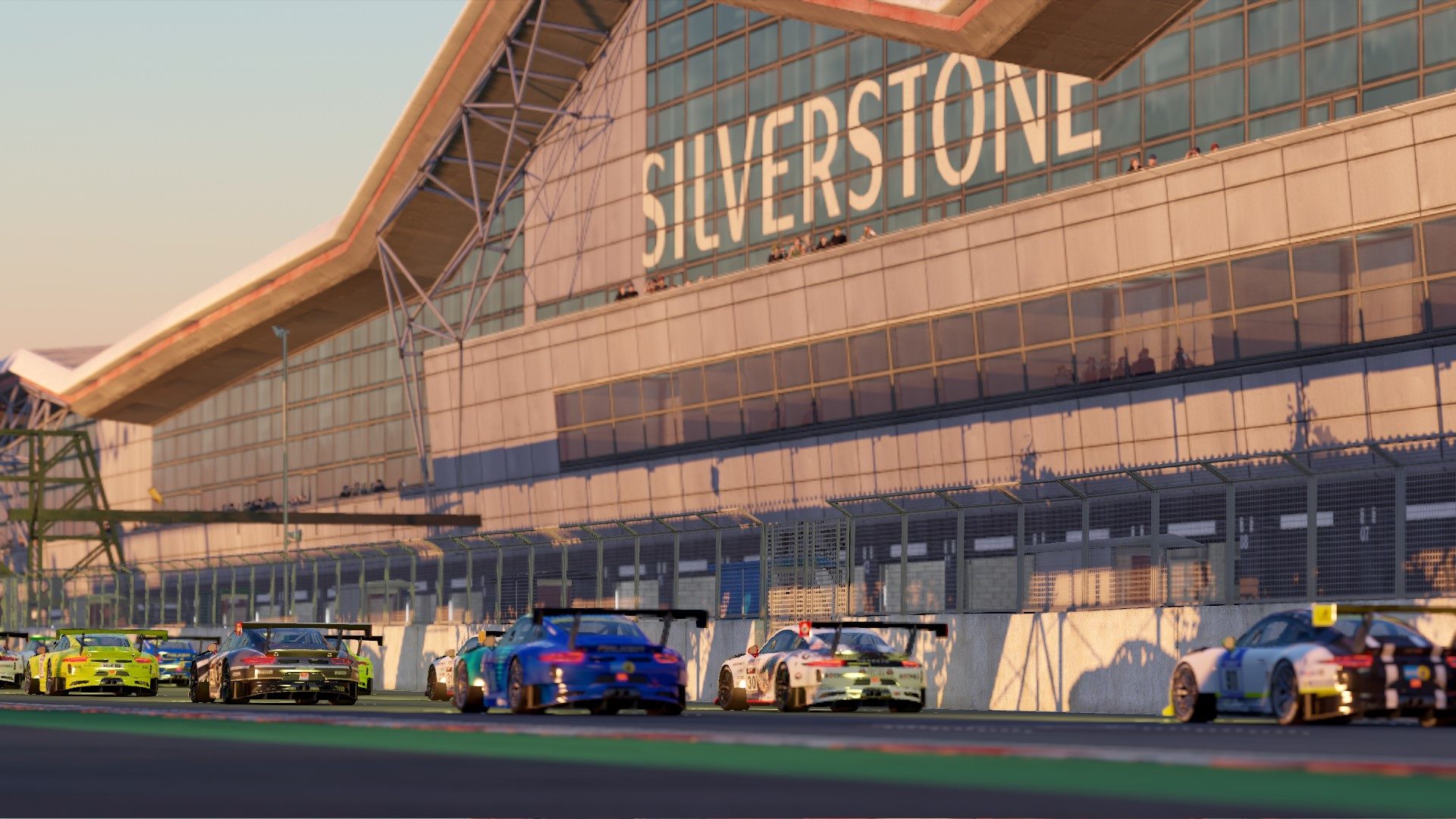 The final round of the SMRC Esports Spring championship took place over the course of last week. Entrants had to master the fast and technical layout of the Silverstone GP circuit in the Porsche 911 GT3 R endurance car. The finalists for PS4, Xbox and PC had to qualify during the midweek rounds to reach the final on Sunday. Thanks to an in-game feature, the elapsed time was increased by a multiple of 60 to give the impression of racing through the night. Each race started at dusk, raced through the night and finished as the sun came up.

The PS4 contingent took to the track with Michael Weddell holding a 27 point advantage over Martin Buchan. Weddell set the early pace with Buchan close behind as the times started to tumble but pole position was eventually taken by Rory Skinner. The young Perthshire motorcycle racer set a blistering 2:02.300 to lead the field for race 1. Martin Buchan needed to finish ahead of Weddell in the first race to take the championship to the wire. Rory Skinner held the lead from the start as Lewis Paterson jumped the title protagonists to steal second. Michael Weddell tucked in behind Skinner as Buchan struggled and promptly inherited the lead as Skinner received a drive-through penalty for jumping the start. As the race settled and the sun went down, Martin Buchan started to creep up on the race leader. Buchan set up a stunning move with a great run through Copse, going door-to-door with Weddell through the rapid Maggots and Becketts corners. Buchan kept it clean and crossed the line to take the win and keep his title hopes alive. Weddell finished second and Stuart Anderson rounded off the podium with a strong drive to third.

Qualifying for race 2 got underway with Weddell holding a 22 point lead. Martin Buchan needed the race win to have any chance of winning. He did what he needed to do and took pole with Weddell second and Darren Allan third. Allan took advantage of a cautious start from Weddell with an aggressive move for second at the start. Allan kept race-leader Martin Buchan honest as night set in over Silverstone. Further back, Finlay Brunton had moved from 13th to 7th towing fellow C1 driver Glenn Alcock behind him. Rory Skinner was involved in a big shunt effectively ending his hopes for the race win. Ahead of all this, Oliver Stuart pinched 3rd from a cautious Weddell only to spin out of contention a lap later. Weddell was sitting comfortably in 3rd with Daryl Adams acting as rear-gunner for a bit of formation flying. Martin Buchan was in a race of his own out front and held a comfortable lead. It wasn’t to be for Buchan though as Weddell kept the foot in to take second place and secure his grip on the title. Buchan took 2 wins away from Silverstone but Michael Weddell kept his cool, brought the car home and finished the night as the first SMRC Esports Spring Champion.

The Xbox racers were up next with the title being comfortably led by Ayden Wilson. A connection issue during the qualifiers meant that Wilson had not qualified for the final so the door was open for Tam Hamill to steal the title. Hamill needed a win to close the 37 point gap. He made his intentions clear by taking pole position ahead of Jonathan Atkinson and Cameron Evans in the first qualifying session. Hamill made a strong start to the first race and led until a small mistake at Copse dropped him to second behind Atkinson on the opening lap. Josh McNab piled the pressure on Hamill with a stunning move around the outside at Vale. That pressure took its toll as Hamill dropped to 5th with yet another error at Copse. A trip to the barriers for race-leader Jonathan Atkinson gifted Hamill the position he needed to take the title fight to the last race. Hamill crossed the line third, Lewis Day finished second with the race win going to Josh McNab out front.

Ayden Wilson held a 21 point lead over Hamill as the drivers set out for the second qualifying session. Andrew McKinlay took pole with Cameron Evans second, Jonathan Atkinson third and Tam Hamill fourth. Chaos at the start saw most of the field delayed at the start but Hamill took advantage and jumped in to the lead. As Hamill tried to stretch his legs, contact with another car dropped him back in to the pack. Unfortunately Hamill couldn’t recover after another spin at Copse and he retired from the race gifting a richly deserved title to Ayden Wilson. Andrew McKinlay and Cameron Evans kept us entertained with a great battle for the lead as the race continued. Evans took the win after a mistake from McKinlay opened the door at Luffield. Josh McNab rounded off the podium with another strong drive. Hamill was gracious in defeat and was quick to congratulate the championship winner in the live-chat.

The PC title was up for grabs next with a narrow 17 point margin between leader John Munro and second placed man, Craig Lax. Munro took the top spot from Lax by six hundredths of a second with Ross McGregor third and Scottish Formula Ford champion Jordan Gronkowski in fourth. As the lights went out Craig Lax took the initiative and led the field for the first few laps. John Munro kept Lax on his toes as they pulled clear of the chasing pack, taking the lead with a solid, late-braking move at Stowe on the third lap. Lax kept it close right to the end of a very clean race but Munro extended his championship lead with a strong win. Lax finished second with Ross McGregor third.

The title was down to the wire with 22 points separating Lax from Munro at the sharp end. John Munro took pole position again with Ross McGregor behind him. Craig Lax, needing a win to stay in the fight, could only manage 5th place for the start of race 2. Munro made a good start as Lax jumped up to third. The field was quickly stretched with several incidents of contact in the first lap. Munro stretched his legs and cantered through a relatively straight-forward race. Craig Lax and Michael Johnston kept us entertained with a good battle for the last step on the podium. Ross McGregor took a close second behind a very comfortable Munro. The champion celebrated wildly and lit the tyres with a series of donuts after crossing the line.

So there you have it. The first ever SMRC Esports Championship draws to a close with Michael Weddell, Ayden Wilson and John Munro taking the top spots. Congratulations to them and to everyone who took part. A special thanks goes to David Christie at Camber Media for broadcasting the whole event and providing fantastic commentary. Thanks also to Steve Burns and the team at the Covey Agency for assisting David with the championship administration. Finally, thanks to you for being involved and keeping the sport we love going through this difficult time.

What’s next? Watch this space…