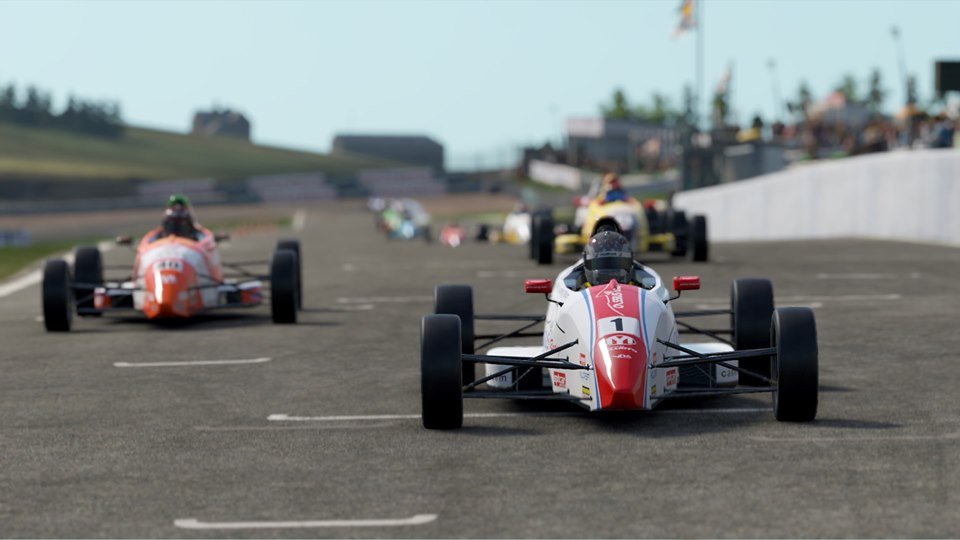 The SMRC first got involved with eSports in 2019 with the Grand Finale taking place on the 23rd of November at the Awards Ceremony in Glasgow where Sam Corson and Kevin Ellis went to head to head on stage. They were competing for a fully funded drive in the Scottish Legends Cars Championship in 2020. Sam Corson emerged victorious and runner up Kevin Ellis was offered a drive in Round 1 of the 2020 season too courtesy of Steve McCall of Burnett Motorsport. Round 1 was scheduled for April 5th 2020. We all couldn’t wait!

Fast forward 4 months and sadly Round 1 has been postponed due to this surreal situation we find ourselves in with Covid-19. However – this setback in real world on track action has saw eSports go from strength to strength. All over the world with people in lockdown and no motorsport on the tv to entertain us more and more people have turned to sim racing. Whether it’s fans just needing their motorsport fix or frustrated racing drivers trying to keep themselves sharp there has never been a higher profile for this activity. Indeed Formula 1 and IndyCar have been entertaining their fans by streaming sim races in the place of actual races with many of the real drivers taking part. The fidelity of the graphics is so accurate these days that the footage almost looks like real life at times. With laser scanned tracks this is no video game, this is real sim racing that is a very useful tool for the modern racing driver to have at home. Here they can learn new track layouts, hone their race craft and compete online with drivers from all over the world.

The 2020 SMRC eSports Championship is up and running. There was a huge response to take part in the first round on April the 5th, when the first actual round should have taken place. Like the date the venue was the same – the virtual Knockhill Racing Circuit. The car was a Formula Rookie, the Project Cars 2 equivalent to a Formula Ford 1600 with a lap time of approximately 54 seconds which is also very similar to the real world lap time.  So many drivers applied across the PS4, XBox and PC platforms that qualifying rounds needed to take place in the run-up to the main event. Spread across the Tuesday, Wednesday and Thursday before Sundays Round, the qualifying events were split into 5 groups and were action packed. Only the top 2 drivers from each group would get through to the Final Round where 10 drivers in total battled it out across 2 Races. The PC Platform proved to be the toughest competition with serious sim racers going head to head with SMRC Racing Stars such as Jordan Gronkowski the 2019 Scottish Formula Ford Champion who took Pole Position and the Fastest Lap however had equipment issues that meant he finished outside the top 2. This showed how real world racing experience and sim racing do have transferable skills. This is not Ronaldo sitting on his couch playing FIFA on his Playstation. The physical actions are very similar to driving a real car so the action proved to be thrilling.

I would encourage anyone who has not watched an eSports Race before to watch the footage on the SMRC Facebook page. There was the same mix of action, drama and conflict as in real racing. I took part myself and was unfortunately excluded before Sunday as I finished 4th in the qualifying round, but the nerves were the same as was the pressure as Gary Wait chased me down on the final lap taking 3rd place with half a lap remaining.

Sundays action kicked off at 6pm with the PS4 drivers fighting it out with Sam McKenzie taking victory in Race 1 who bounced back from a jump start drive through penalty and carved his way through the field to take the win. In 2nd position was Aiden Sloss followed by Calum Henning. Race 2 saw lots of action with Aidan Sloss leading for most of the race. On lap 10 Aidan and Michael Weddell suffered contact dropping Aidan right back but Michael managed to stay in 2nd position and started hunting down Sam McKenzie over the last 2 remaining laps. Sam crossed the line in 1st position but due to a time penalty the victory went to Michael Weddell, dropping Sam to 2nd and West College Scotland Citroen C1 Cup Race winner James McCracken took the last podium position. It was a dramatic start to the night. Sam McKenzie Leads the Championship for PS4 on 45 points, with Aidan Sloss and Michael Weddell tied on 32 points.

The Xbox action followed with Ayden Wilson taking Pole Position and dominating Race 1 finishing with a 6 second lead over James Black who was followed by Tam Hamill. Tam took Pole Position for Race 2 and was chased by race 1 winner Ayden Wilson as the race started. Ayden closed up and by the end of lap 1 was side by side down the main straight with Tam where he took the lead into Duffus Dip. Tam spun exiting the chicance on Lap 9 dropping from 2nd to 4th. This gave Ayden Wilson some clear air where could drive to the victory finishing with a 13 second lead, Tam Hamill fought back and finished 2nd with Crissy Miller rounding out the top 3. Ayden Wilson leads the Championship for XBox on 50 points, with Tam Hamill 2nd on 36 points and James Black in 3rd on 30 points.

The Grand Finale with the Sim Racing Professionals finished off the night on PC. Qualifying for Race 1 showed amazing pace with a 53.362 second lap by Craig Lax, 6 tenths faster than the 2nd place time of Lorenzo Turri. Race 1 was a nail biter as Lorenzo chased Craig Lax, applying loads of pressure trying to take the lead. On lap 3 going too hot into Clark Corner (we’ve all done it!!) Craig lost the back end of the Formula Rookie before spinning into the scenery handing Lorenzo the lead. Craig dropped all the way back to 7th position. John Munro and David Simon battled it out over the remaining laps as they chased down the leader. A slow down penalty for David Simon unleashed John Munro on lap 9 as he eyed up the victory. The final lap started with John only half a second behind race leader Turri. He piled on the pressure but couldn’t get ahead. The top 3 finishing Lorenzo Turri, John Munro then David Simon. For Race 2 Kieran Smart took Pole Position and off the line attempted to sweep across to cover the inside line into Duffus from David Simon in 2nd place, it didn’t work however and David took the outside and the lead. Craig Lax was desperate to make up for his Race 1 lost opportunity and took 2nd place from Kieran at the end of the first lap. Race 1 winner Lorenzo Turri had some dramas and dropped to 8th place on Lap 1 also. At the end of Lap 2 as Craig Lax took the lead David Simon lost the back end out of the hairpin and sadly had contact with John Munro who could do nothing to avoid the spinning car. This dropped both these fast chargers back down the field where they continued to battle until the flag. Craig Lax made up for Race 1 and took the victory, Kieran Smart finished 2nd with Steve Quinn coming home in 3rd position. The Championship standings were equally as tight as the racing with John Munro leading on 34 points with Lorenzo Turri and Craig Lax tied on 33 points.

I thoroughly enjoyed the virtual action especially given the absence of real racing at the moment. We now move on to the virtual Oulton Park for the 2nd Round on April 12th, again the qualifying rounds for the 3 platforms will take place on the Tuesday, Wednesday and Thursday. Catch the action on the SMRC Facebook page with commentary by the excellent David Christie of Camber Media.