The Scottish Motor Racing Club ran 16 races for a mixture of Saloons, Sportscars and single seaters at Scotland’s premier circuit in Fife. This was on the reverse direction anti clockwise circuit, which Knockhill has permission to run, this is unique in the UK, as the circuit can also run clockwise. The day was mainly sunny with some cloud cover but the track stayed dry.

Scottish Legends Cars the 5/8th size race cars with motorcycle engines raced through two heats and a final. Heat 1 saw Steven McGill lead all the way, to win from defending champion David Hunter who was close to him. The gap back to 3rd was 5 seconds with multiple Champion John Paterson taking the place on the final lap, from Duncan Vincent who had started last on the grid. Dave Newall took 5th a few car lengths back. Heat 2 Dave Newall – who leads the 2019 championship – won this race, despite lots of pressure from Stewart Black.  Late on Steven McGill snatched 3rd from John Paterson, who spun at the hairpin with a lap to go. This let David Hunter into 4th as Paterson got home 5th. The 10 lap Final has the days lowest point scorers at the front of the rolling grid. But Duncan Vincent grabbed the lead by the first corner the hairpin from a mid grid starting spot. He led for a couple of laps then David Newalll passed him on lap 3. John Paterson moved up from 6th to lead on lap 7 and then won by one tenth of a second from Steven McGill, with Newall pushed down to 3rd though only a car length behind at the flag. David Hunter took 4th again despite having had Stewart Black on his tail from mid distance. 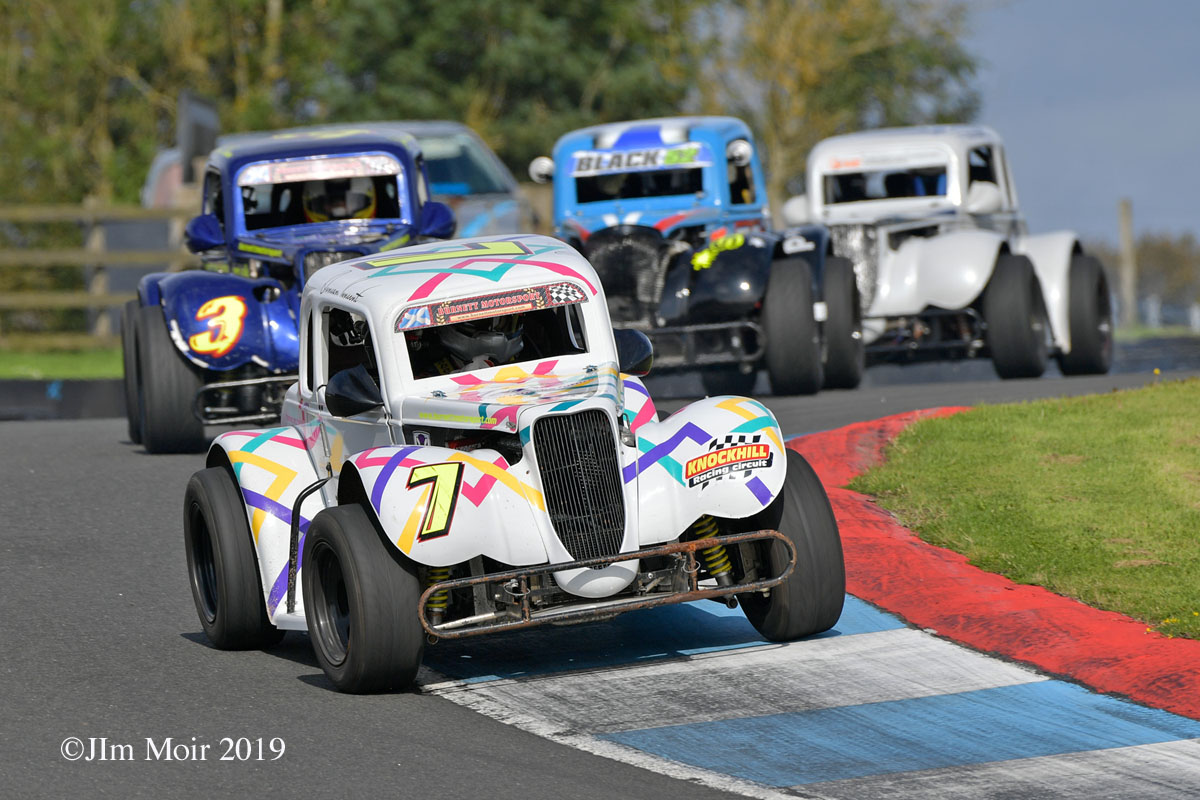 Celtic Speed Scottish Mini Cooper Cup is as popular as ever with 22 cars on the grid. Former Champion Mark Geraghty led all the way to win Race 1. He was under pressure from Craig Blake and was just half a second ahead at the end of the race. Into 3rd came Vic Covey jnr having started 5th. Championship leader Robbie Dalgleish was down in 9th having run wide with his championship rival Michael Weddell on lap one at the first corner, and both drivers lost many places as they regained the track. Weddell took 7th having been quicker through the traffic after they were 13th and 14th on lap 2 when a safety car came out as Hannah Chapman’s return had only lasted as far as Clark corner, where her car was in the tyre wall. Race 2 ran with rain spots on the car windscreens. Geraghty again led but he spun his car out of the lead on lap 4. Several other cars spun at this corner Macintyres, with an oil spill suspected, but not Vic Covey jnr. The former Champion led to the flag and survived a safety car period and subsequent restart, with Robbie Dalgliesh being all over him. Ian Munro was close in 3rd and newcomers cup leader Ian Bonthrone had a fine 4th. Daniel Patterson had a good 5th having started 10th with Craig Blake on his boot lid at the flag were he’d been for a few laps. This race also had a safety car period mid race as 2 cars were retrieved from MacIntyres barriers.  The race was red flagged on lap 7 with another car off at Macintyres. Race 3 Robbie Dalgleish the man who has won 9 races this year, did it again. He grabbed the lead on lap 2 having started 5th from Craig Blake. He was never headed and won by nearly 2 seconds. Ian Munro held 2nd from lap 2 and defended from Craig Blake and Ian Bonthrone. Vic Covey jnr took 5th while team mate Michael Weddell’s  was  6th. He had been 2nd in the Championship only 2pts behind Dalgleish in the morning, this gap has grown 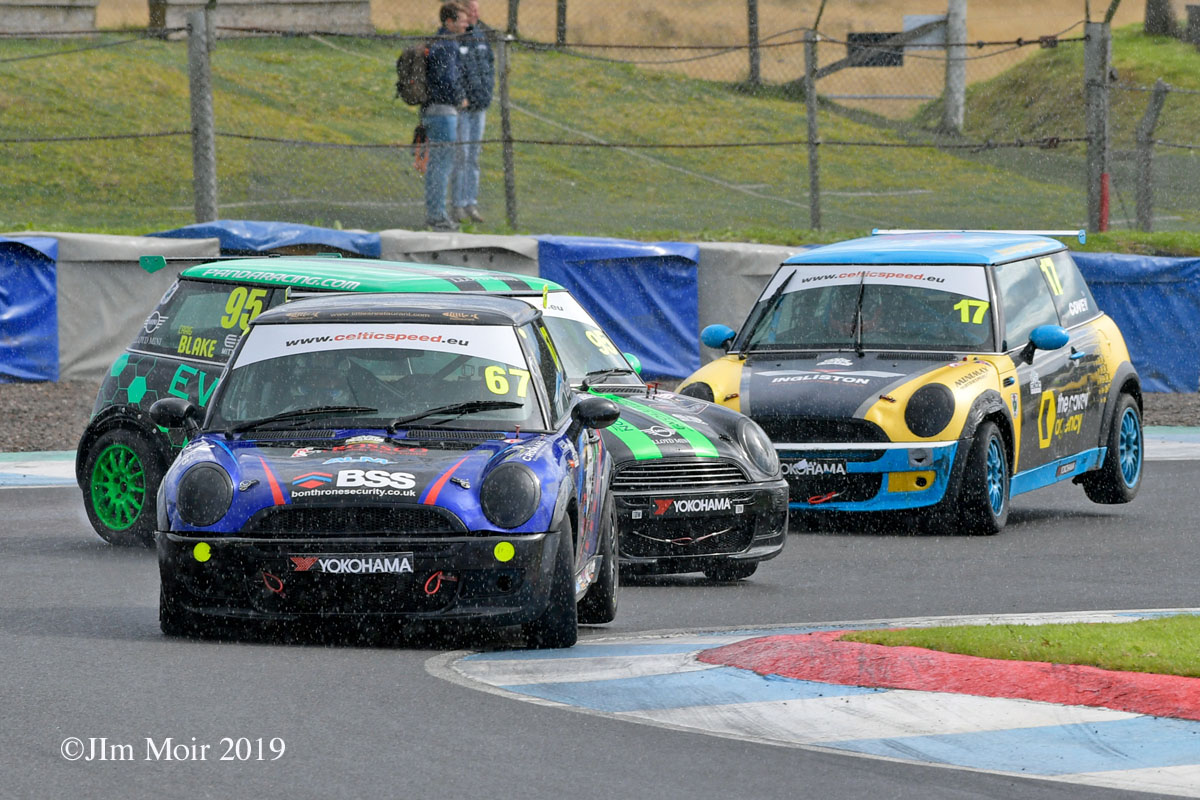 Scottish Fiesta ST Cup and Mini Cooper S Cup, sees the Minis start 10 seconds behind the less powerful Fiestas. Race 1 Oly Mortimer in the Mini Cooper S came through the field to win by nearly 2 seconds from Paul Wilson, who headed him for the first half of the race. Stuart Buchan took 3rd on lap 7 from top Fiesta ST of teenager Jack Davidson, who would win the Fiestas class then be excluded on is return having missed a couple of meetings. This gave top Fiesta spot to Simon Smail who was 4th with Stewart Scott next Fiesta, a few seconds back in 6th. Steven Gray was 3rd Fiesta sitting on Scott’s tailgate at the end.  Championship leader Russell Morgan was 6th Fiesta home. In Race 2 Davidson made amends, coming from the back of the Fiesta grid he shot past the field, and demoted early leader Smail after a restart, when the race was stopped due to a Mini hitting the tyre barrier at the chicane. So the race was red flagged and a short race which lasted two laps was run as yet another red flag came out with an ST car in a gravel trap.  The restart had seen Davidson grab the lead on lap 2 and still be there when the race was stopped again. It was the first time a Mini hasn’t won on the road. Behind him 2nd went to Simon Smail in a Fiesta, with 3rd Fiesta Steven Gray next up. Top Mini was Oly Mortimer got a close 4th just ahead of Fiesta ST driven by veteran Peter Cruickshank. Paul Wilson in another Mini Cooper S rounded out the top 6. Russell Morgan retired his car after going off at the hairpin when 8th.  Lorn Murray took a close 7th as the field had stayed together. 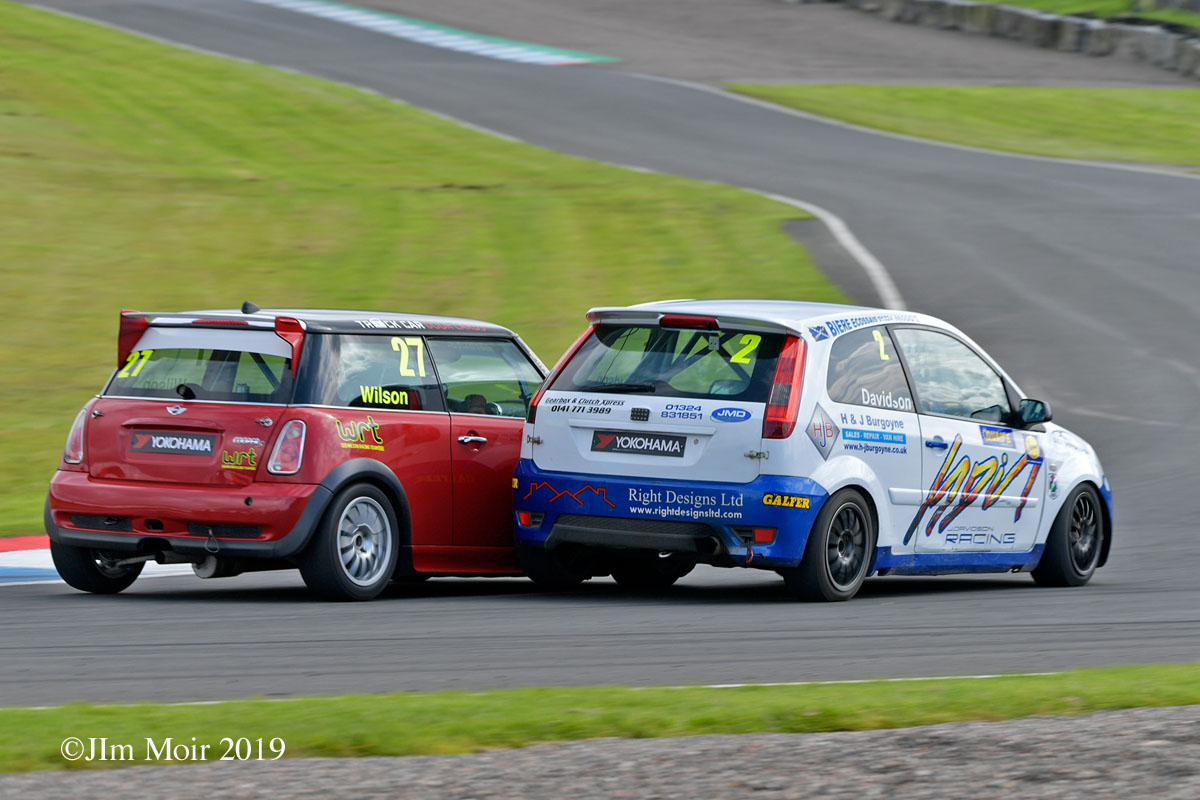 The single seater race saw the current Scottish Formula Ford 1600cc cars combined with the historic 1100cc engine Formula Juniors. Race 1 The FF1600 cars started ahead of the FJ’s and ran away from them. Jordan Gronkowski led from the start opened out a couple of seconds lead then got closed down by Matthew Chisholm with Neil Broome on his tail. But on lap 10, Gronkowski slowed while lapping an FJ and dropped to 3rd behind Neil Broome and Matthew Chisholm. But 3rd was enough for him to win his first Scottish Formula Ford Championship. Broome won the race as Gronkowski sat on Chisholm’s gearbox over the last lap.  In the Formula Juniors Thomas Antiss won the class easily in his Lotus, with Vernon Williams 2nd in the Lynx.  Gronkowski said “it’s about the season and me and my dad stating 20 years ago in karting. To be champion of Formula Ford in your own country, there’s no words to describe it. It’s about a 20 year journey not about today. My thanks to everyone who helped and supported me, it will take a while to sink in”. Race 2 Gronkowski didn’t start, so Neil Broome led all the way despite lots of pressure from Matthew Chisholm and Logan Hannah, who took a good 3rd. Steven Barlow chased her all race as FF cars lapped the Formula Juniors. He was usually only a couple of car lengths back in 4th. Thomas Anstiss was again top FJ in his Lotus well clear of Vernon Williamson and Graham Barron. 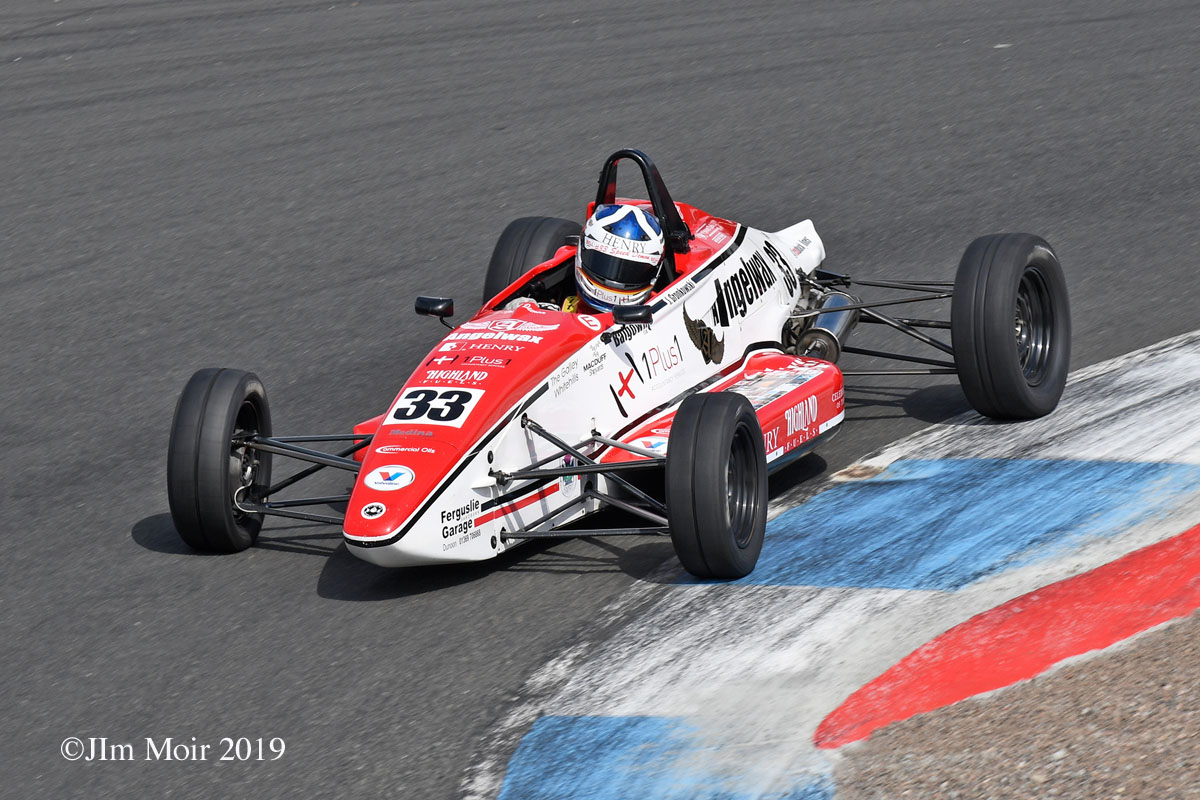 The SMTA Citroen C1 Cup race had a strong grid of 17 cars, raced mainly by novices and newcomers. Race 1 they all kept close in race 1 as, former MINI driver, Steven Brewster led all the way, to win from Finlay Brunton who grabbed 2nd on the final lap of this 10 lap race. Ryan Smith who leads the championship took 3rd, having run 2nd for 8 laps. Kieran Preedy was a close 4th, with Emily Glanvill around half a second back in 5th.  In Race 2 Steven Brewster led until mid race, then Finlay Brunton eased past him on the back straight. Kieran Preedy soon followed him into 2nd and chased Brunton home, being half a second back at the chequered flag. Ryan Smith dropped to 4th on lap 6, but recovered and retook 3rd on the last lap at the final corner. Steven Brewster was 4th just ahead of Ross Dunn and Thomas Denham who just kept Emily Glanvill at bay. 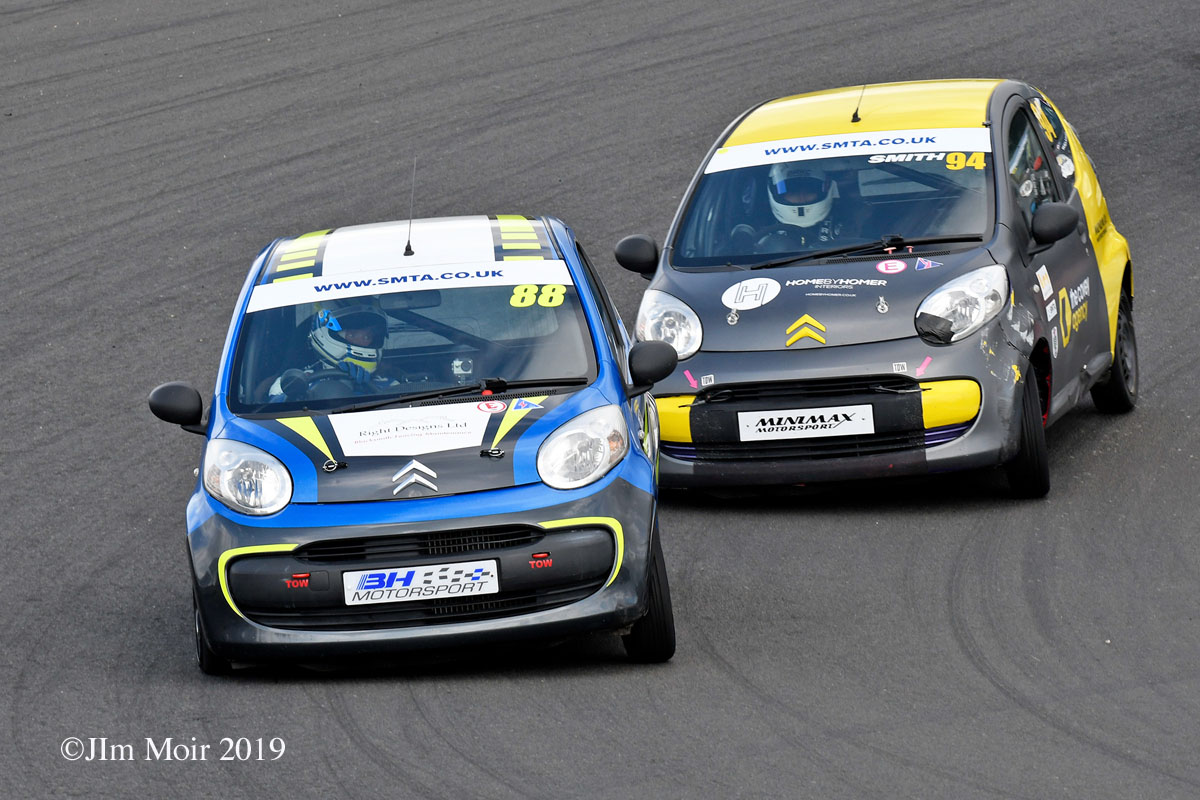 The Scottish Saloon and Sports Car Championship had two races. Ron Cumming dominated both races. In Race 1 he won as he pleased with his Nemisis kit car. Keith Cowie brought this Seat Leon saloon into 2nd having held the place all race. William Robson was 3rd in the Focus RS, the reigning Champion had a good tussle with the TVR Tuscan of Stewart Robb, which passed him mid race but then retired on lap 8. Race 2 was again won by Ron Cummings and he was well ahead. Cowie again took 2nd , but this time the TVR lasted the race and Stewart Robb  held onto 3rd for nearly all 12 laps, a place he grabbed after a fast start. William Robson pressed him continually, but the Focus was on the TVR boot lid when Robb slid at the final corner and Robson powered past to grab 3rd on the finishing line, as they raced downhill to the flag. Well back but scoring more valuable class points was championship leader Duncan Steele in his MR2 as he chased Nathan Dickson’s BMW. They came home 5th and 6th after a couple of retirements. 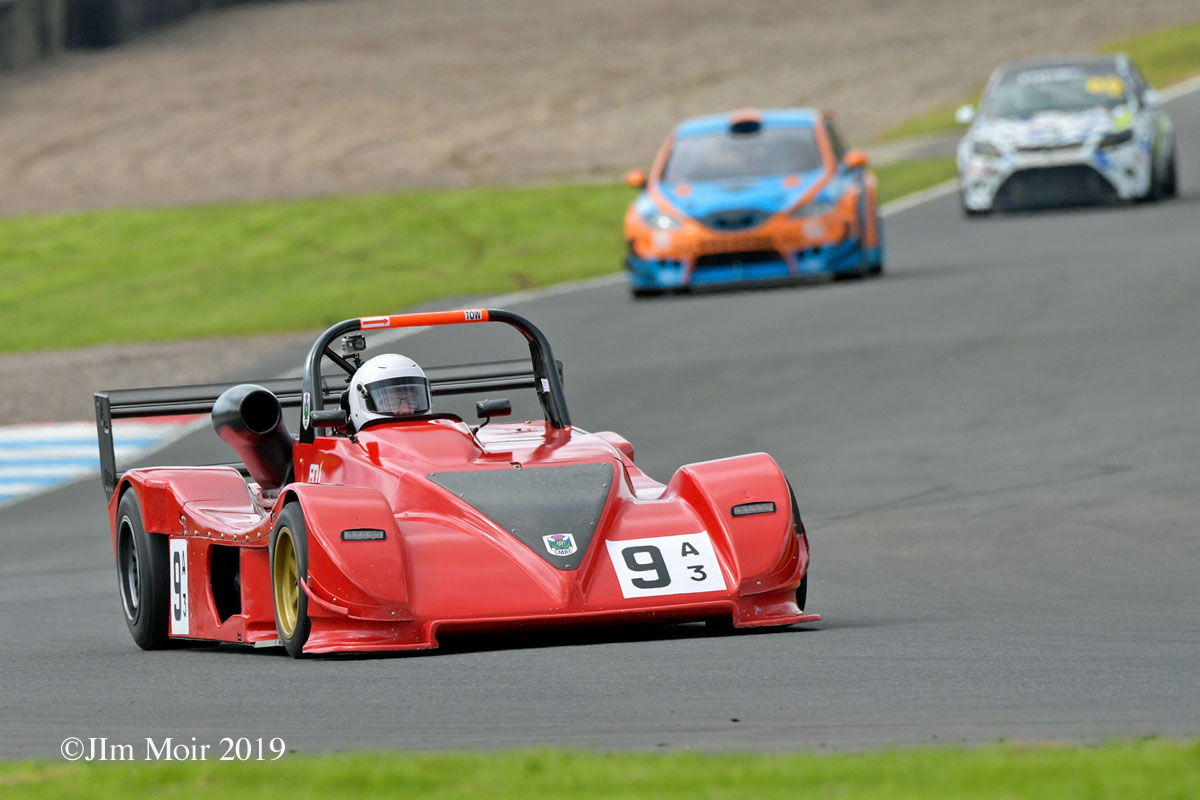 Scottish Classic Sports and Saloons for cars made before 1989 saw a good mixed grid of 14 cars. Alastair Baptie won both races in his MGB GT V8. Race 1 started with Kinmond leading from Baptie  but was red flagged and stopped after 3 laps with a Clan Crusader of Peter Richards  on its roof in the chicane gravel trap. So the restart of race 1 saw Baptie chase the fast starting Rover SD1 V8 of John Kinmond. He took the lead on lap 5 on the back straight, by out dragging the big Rover as they came out of the hairpin. He won by just over a second from Kinmond. Into 3rd came another V8 powered car, the Triumph TR8 sportscar driven by Shonny Paterson.  Bruce Mitchell was 4th with his yellow Lotus Europa, as Alex Montgomery took class A the small engine class, with the Fiat X1/9 sportscar that Baptie won the title with last year. He started slowly but caught and passed Mario Ferrari’s class A leading Alfa Coupe mid race. Race 2 saw Baptie lead all the way and ease well clear. Kinmond dropped back as he slid the big Rover out of the hairpin, his tyres seemed to go off.  Paterson retired the Triumph TR8 early in the race, so Mitchell brought the Lotus Europa home 3rd. He was well clear of Montgomery in the Fiat X1/9, who beat his class rival Mario Ferrari’s Alfa again after he had a slow start, but he passed the Alfa mid race. In the Fiesta XR2 class Nick Forsyth won it in both races from Duncan O’Neill. But Forsyth was racing reigning champion Martin Ramsay’s car as a tribute to him, after he sadly passed away the weekend before. 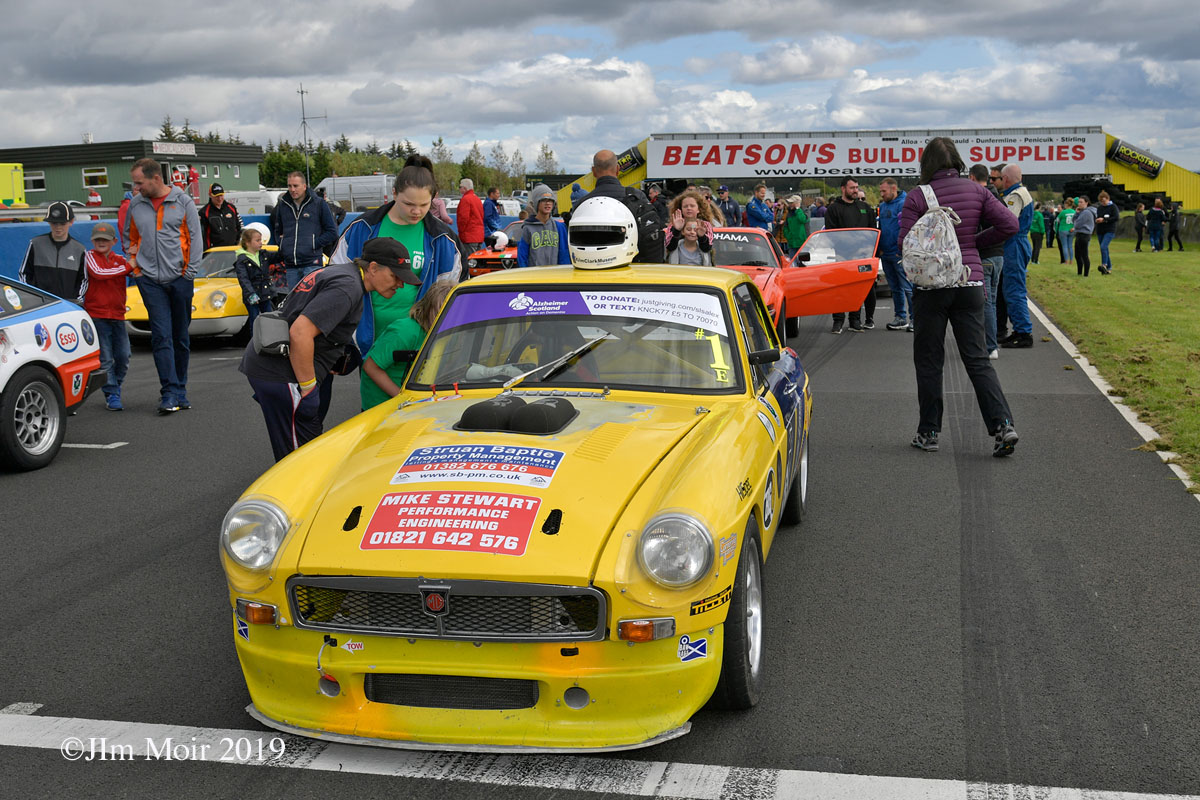 Updated points for all championships can be found here.