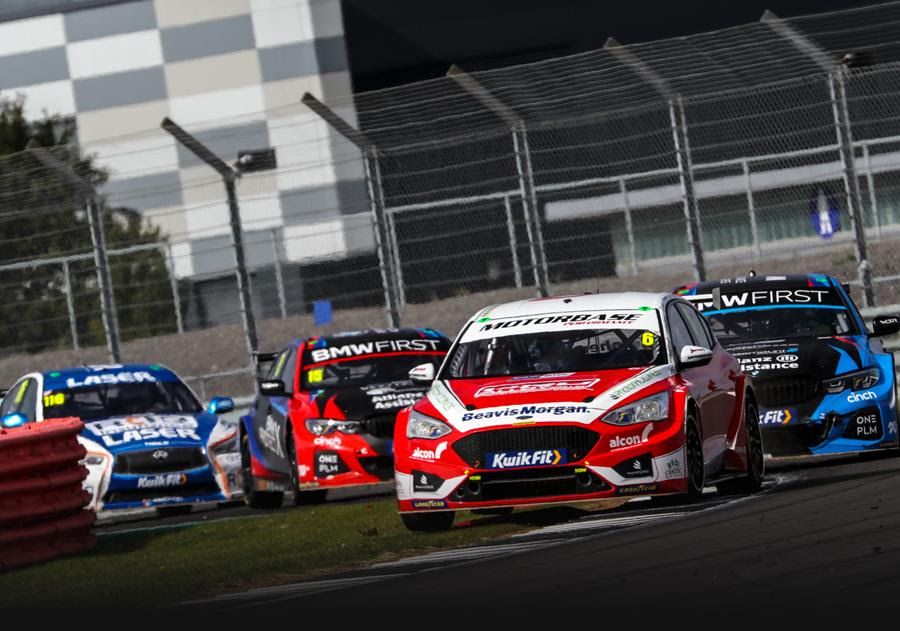 Silverstone started out so well! I qualified third overall on Saturday and converted that into a podium in Race 1, holding off Turkington and Sutton. This meant we had held on to our streak of scoring a podium at each circuit this year, but after our success in the first race it quickly went down hill.

In Race 2, I got off the line well and held third place, however as I braked into Maggots, Ash Sutton misjudged his braking and tagged me, sending my Focus ST into a spin. The car stalled on me and by the time I got it fired back up I was dead last and a few seconds back, but I stayed composed and fought through the field and back into the points with a 14th place.

Despite starting from the midfield, things looked bright for Race 3 as I had now shed the 42kg of success ballast I’d been carrying, making the car more agile and racey. After a good launch off the line where I passed two cars I quickly started making my way through the pack, passing Cammish and Turkington for 8th place. It was lap 4 and Matt Neal was next! I got a better run out of Copse and came along side Matt as I positioned myself on the inside for Maggots. What happened next came as a complete shock! I didn’t put pressure on Matt to move further right and I didn’t get the feeling he was trying to keep me left, but one moment we had a clear gap between us and then a second later I felt my rear go light. Before I could compute what had happened I was heading backwards along the grass at over 100mph. I looked over my left shoulder to see a metal barrier coming towards me, so there was nothing else for it but to brace myself and wait for the impact. The worst part was the waiting, but once the first hit came and I started to roll, I just kept my arms tight to my chest and waited for everything to settle.

The car hit the barrier backwards and then rolled end over end three times, landing on the track on the exit of Beckett’s. Thankfully the cars on track spotted my flying Focus and managed to navigate around me. I am so thankful that no-one else was collected!

I quickly jumped out of the car and was guided into an ambulance and taken to the medical centre. As a championship we are quite concerned about concussion, as a number of drivers have experienced it in the last couple of seasons, so after a physical check over I had to sit a memory, vision and reaction test, which I passed. In fact, I had very few aches. Mentally I was more upset and frustrated that the crash happened in the first place. Despite feeling okay I remained cautious and accepted a lift back up to Scotland from a team member which was a massive help.

The car was an absolute wreck and posed a huge challenge for the team as Croft was just two weeks later. However, they got straight to work and by half past midnight the chassis was stripped bare and sitting on stilts in the Motorbase workshop. The very next morning it was transported to Custom Cages in Lincoln who then began inspecting the roll cage. It had stood up well and kept me safe, but in absorbing the immense energy many roll bars had been bent. The whole roll cage from the middle of the car backwards needed replacing which they set about doing on Tuesday. They have been working at full speed, but our deadline is very tight. If we can receive the chassis by Sat the 3rd Oct then we have a shot at getting it back on track at Croft. If there is a team out there who can make it happen, then it’s Motorbase Performance!

Despite the shunt there are some real positives to take from the weekend, none more so than seeing my team mate Ollie Jackson take his first ever BTCC victory. After reaching rock bottom the team were given a real boost!

I’m not doing too badly points-wise as I sit 5th overall, 45 points back from the leader. With three events and nine races to go I’ve not thrown in the towel yet and feel even more determined to come back fighting at Croft!

I’d just like to say a big thank you to Motorbase Performance and Custom Cages for designing and building such a safe car, the marshals and medical team for keeping me safe and to all my friends, family and sponsors for showing such concern and support following the incident!