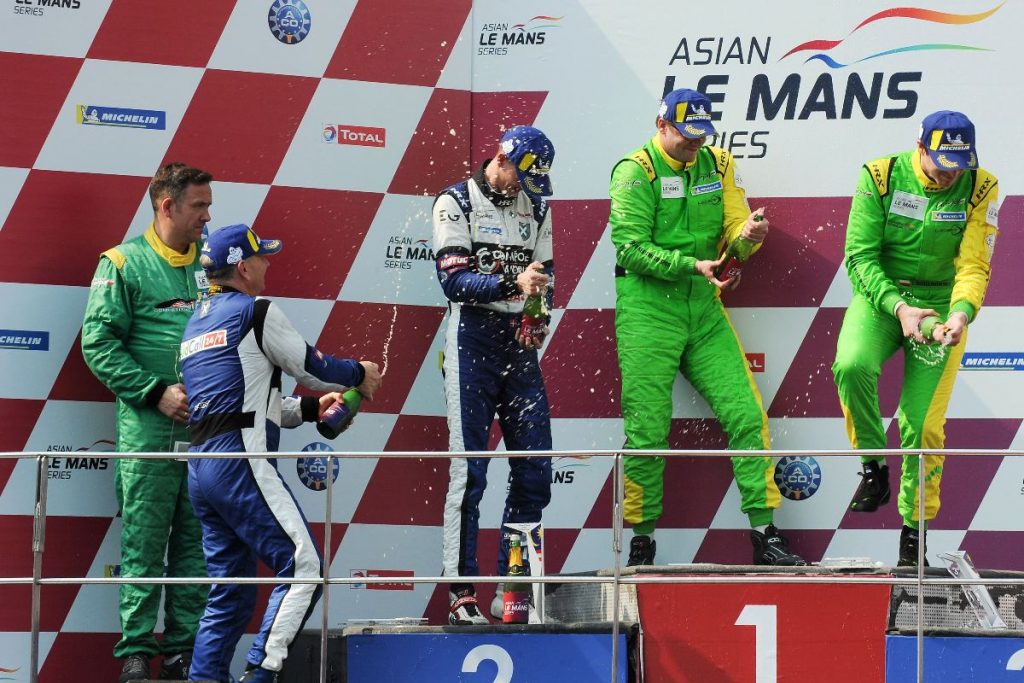 Ecurie Ecosse / Nielsen Racing finished its maiden Asian Le Mans Series campaign in style today at Sepang, its #7 Ligier JS P3 finishing second in the LMP3 class, in turn scoring the team a third podium finish in a row in the series.

Christian Olsen and Nick Adcock shared the wheel of the #7 for the four-hour race at the Sepang International Circuit and battled both the competition on track and sweltering heat en route to their best finish of the season.

Adcock started the race from second place on the grid, and in the opening scramble dropped down to sixth. He quickly found a rhythm though and managed to reel off a series of consistent lap times during the opening hour before handing over to Olsen for the second stint of the race.

Olsen, like Adcock, got up to speed quickly and climbed up to fifth place before the first of two safety car periods occurred just before the 90-minute mark.

The safety car bunched up the field and prompted Olsen to pounce on the fourth-place car shortly after the action restarted, before taking third off the #79 Ecurie Ecosse / Nielsen Racing Ligier JS P3 – then driven by Tony Wells.

From there, Olsen was able to reel in the second-place driver through traffic and keep the car in contention for a podium before Adcock climbed in for his second stint early in the third hour.

A second safety car in the third hour once again benefitted the #7 crew, bunching up the lead pack in LMP3 and setting up Olsen for the dash to the flag, sitting second after the pit cycles shook out.

The Dane, who was in the car to the end, performed well with the temperatures still incredibly high and took a comfortable second place finish after pushing hard to the flag while other contenders dropped away due to penalties and incidents.

The #79 of Colin Noble and Tony Wells meanwhile, finished the race in fourth place. They also looked set to finish in a podium position after starting from the back of the grid but were caught out by the second safety car.

They lost almost an entire lap due to their position in the queue, ending their chances of a top three finish. Noble did lead the race on two occasions, both during pit cycles, showing front-running pace during his time in the car, but this time the silverware was just out of reach.

Christian Olsen: “The heat was ridiculous, it was like driving in a sauna, but you couldn’t get out when you want. Good thing we have an air-conditioned room to escape to after stints. Aside from a couple of moments, the car felt amazing, and in the last stint, I was able to get the job done.

“I’m disappointed to have been handed a drive-through penalty, but this is still a memorable result and performance. Every time I drive I take a step up, I’m going to keep working, I’ll be happy with my results when I start winning races.

“2018 was always going to be a learning year, now I feel I’ve done that and I’m ready to go full throttle. I’ll be heading to Barcelona next for two days of testing before the ELMS Prologue. I can’t wait to get started with the European season.”

Colin Noble: “We came here to the Asian Le Mans Series to learn, to get more seat time and to measure ourselves against the other established teams. After bad luck yesterday before qualifying, I started from the back of the grid, and made my way through quickly to join the leading group.

“It was a hard-fought race with the heat causing major problems for everybody. We led the race on two occasions, looked like real contenders for the class win but were just plain unlucky with the timing of the safety car and our position ontrack. We closed every gap, but without another caution period, there was never any real chance of grabbing back almost a full-lap deficit against the leading cars in a high-quality field.”