The SMRC ran 16 races for a wide variety of cars at Knockhill on 5th May. It was a cloudy but dry day, with the sun peaking through occasionally. The meeting also celebrated 60 years of the iconic Mini. There were lots of Minis present with a lunch time track parade of over 100 MINI’s, a Celtic Speed Scottish MINI Cooper Cup grid walk for fans and a special 60 years of MINI programme.

As always the Celtic Speed Scottish MINI Cooper Cup had 3 races. Two victories for Robbie Dalgleish in races 1 & 2 and a 4th in race 3, saw him strengthen his grip on the championship, having now won 5 of the first 6 rounds. But it wasn’t easy. He only won the two races by a few car lengths, having survived lots of pressure. In race 1 he led all the way to beat 2017 champion Mark Geraghty by 2 tenths of a second, with Vic Covey jnr a fine 3rd on his return to Coopers, having started 7th.  In race 2 Robbie didn’t lead all the way, dropping to 3rd at the start, but he was 2nd half way round lap 1. He tracked Mark Geraghty and nipped past at MacIntyre on lap 4, to head a 4-car train at the front. Ian Munro took 2nd on lap 5 and held off Geraghty as Dalgleish opened out a 5 car length gap to win. Race 3 was won by Mark Geraghty in another 2 tenths of a second  gap finish, from 2018 Mini Cooper Newcomers Cup winner Michael Weddell.  But Weddell led for 100 meters at the end of the last lap from Leslie’s to the top of Duffus, then Geraghty out dragged him to the line.  Former Mini Cooper Champion Vic Covey jnr was a close 3rd in his newly acquired car. This race saw between 5 and 8 cars constantly fight for the lead, with a traffic jam of cars running 2 and 3 abreast at the hairpin every lap. Robbie Dalgliesh finished 4th. Ian Bonthrone took all 3 Newcomers Cup wins , that’s a 100% win record so far, and Ashleigh Morris took 3 Ladies Cup wins. 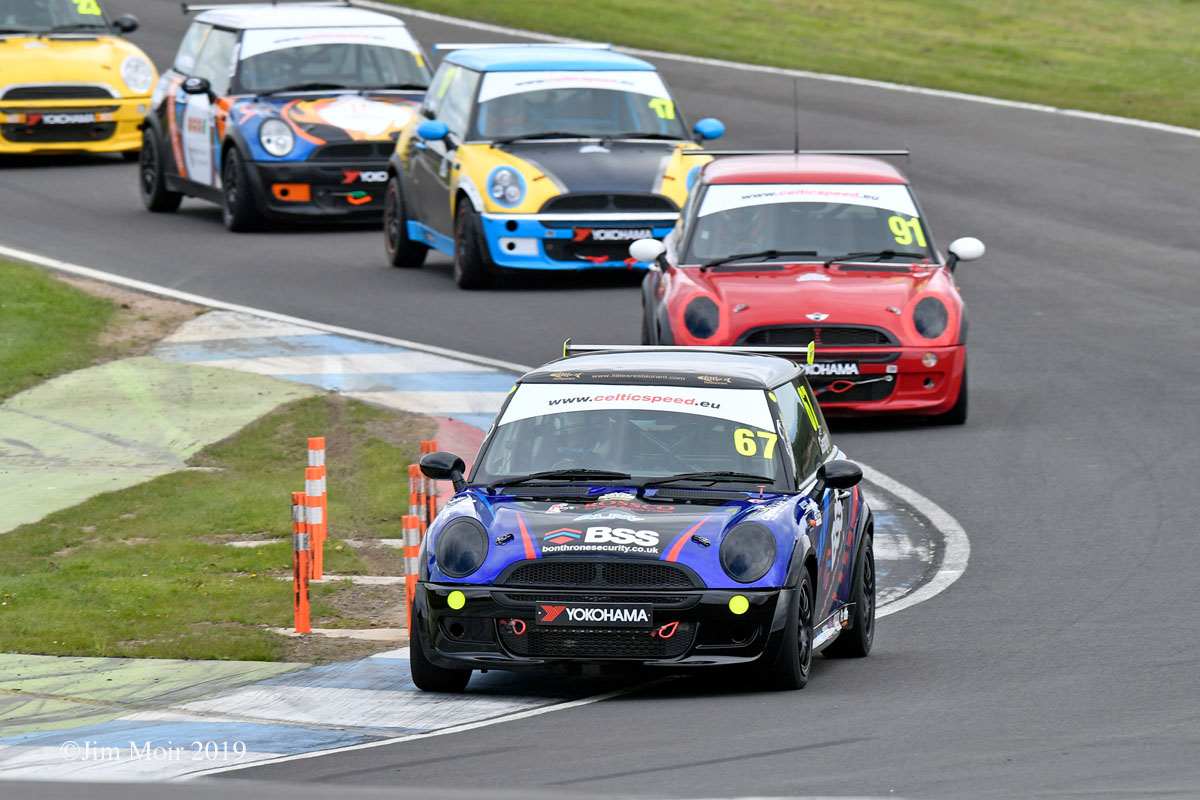 The Scottish Formula Ford single seater Championship, saw two dominant wins for the experienced Jordan Gronkowski. He beat teenager Logan Hannah in race 1 by just over a second, after a late safety car period bunched up the field, as Jordan had built up a ten second lead by then. Lady racer Logan had her best ever finish, a fine 2nd holding off Matthew Chisholm. This was after she swapped places twice with Neil Broome. He then dropped back after what looked like a missed gear change to finish 4th behind Chisholm.  In race 2 Logan led for a few hundred meters then Jordan swept by as they braked for the 1st corner, the hairpin. Then Jordan led all the way, as Matthew Chisholm got ahead of Logan Hannah early on, and this time held onto 2nd as Van Diemen cars took a 1,2.  Logan Hannah still took 3rd and was top Ray car. Jordan said after race 1, ‘I got a good gap, and backed off. Then the safety car came out, but it was okay. It was just a case of getting my head back in and keeping calm’.  That’s 4 wins in 4 races for Jordan Gronkowski. 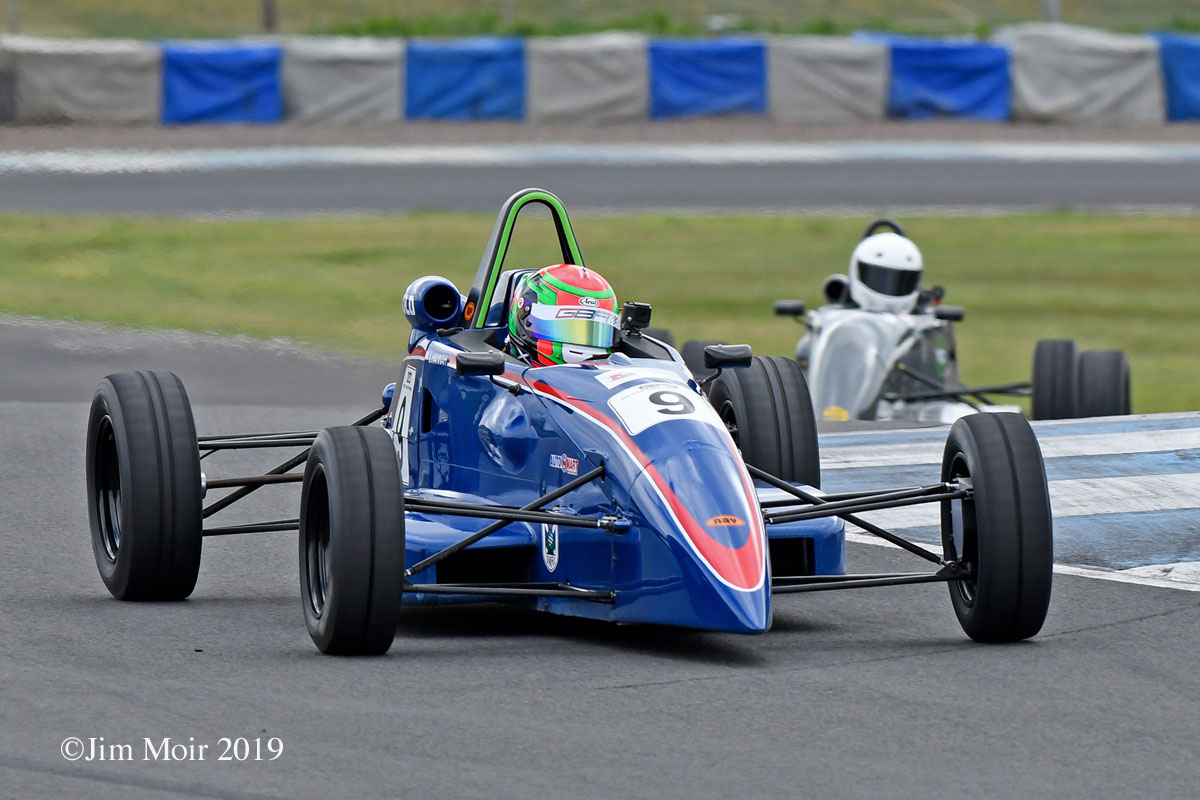 In the combined Scottish Fiesta ST Cup and Mini Cooper S Cup, in Association with Farmer Autocare, Oly Mortimer took two impressive outright wins. Minis start 10 seconds behind Fiestas, but he was leading in both races by mid distance, as he powered away from the other Minis. In the Fiestas 17 year old Jack Davidson won the class leading home their 10 car field.  He was 3rd overall in race 1 behind 2 Minis of Mortimer and Scott Forbes. Second in STs was Steven Gray who held onto Davidson until mid distance, followed by Ryan Stirling.  In race 2 Davidson was an impressive 2nd overall, as ST podium spots went to Steven Gray 2nd and Ryan Stirling 3rd again.  Stuart Buchan was 3rd overall and 2nd Mini having scrapped with Scott Forbes all race, who was close in 4th at the flag. The two Mini Cooper S wins continue Edinburgh based Oly Mortimer’s 100% win record, dating back to early 2017. Oly said after race 1, ‘The car was flying and I’m really enjoying the reverse direction, and it’s great to see so many Minis on display at the circuit’. 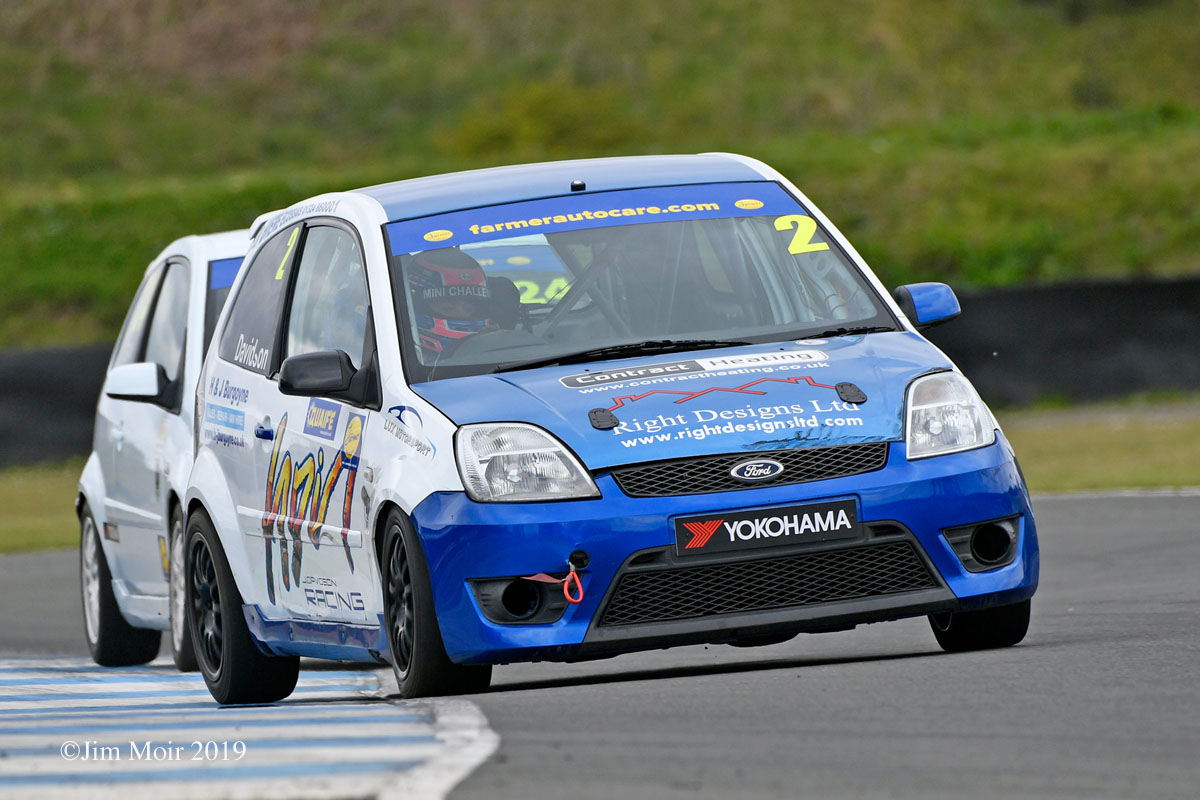 In the new SMTA Citroen C1 Cup, teenager Jack Davidson was again the star. In his first ever races in this Championship, he took two lights to chequered flag wins. Race 1 saw him under lots of pressure until lap 8 of the 10 lap race, when Ryan Smith dropped back a couple of seconds, having sat on Davidson’s tailgate from the start. These two had pulled away from the 14 car field, which is growing in numbers as an entry class into circuit racing in Scotland. In 3rd , 16 year old Kyle Grant got his first podium finish. Glenn Alcock had the honour of the first roll with a C1 in this new championship, as he put wheels in the gravel at Clark, and landed on his roof on the last lap. Finlay Brunton race winner in April also scored an unfortunate dnf. In race 2 Jack Davidson quickly got clear, and led the chasing pack all race for another fine win. Colin Main went from 6th to 2nd  from Steven Morrison by only two tenths of a second at the line. Ryan Smith battled hard and grabbed 4th at the last corner, Duffus, from Reis Robertson. Glen Alcock raced his car minus front and rear screens, though was well down, but finished in race 2. After race 1 teenager Jack Davidson commented on his first C1 race, saying ‘It was quite hard. I had a lot of pressure on me for a while, then got a gap. It’s quite hard to drive them, but its good fun and you must keep momentum up.’ 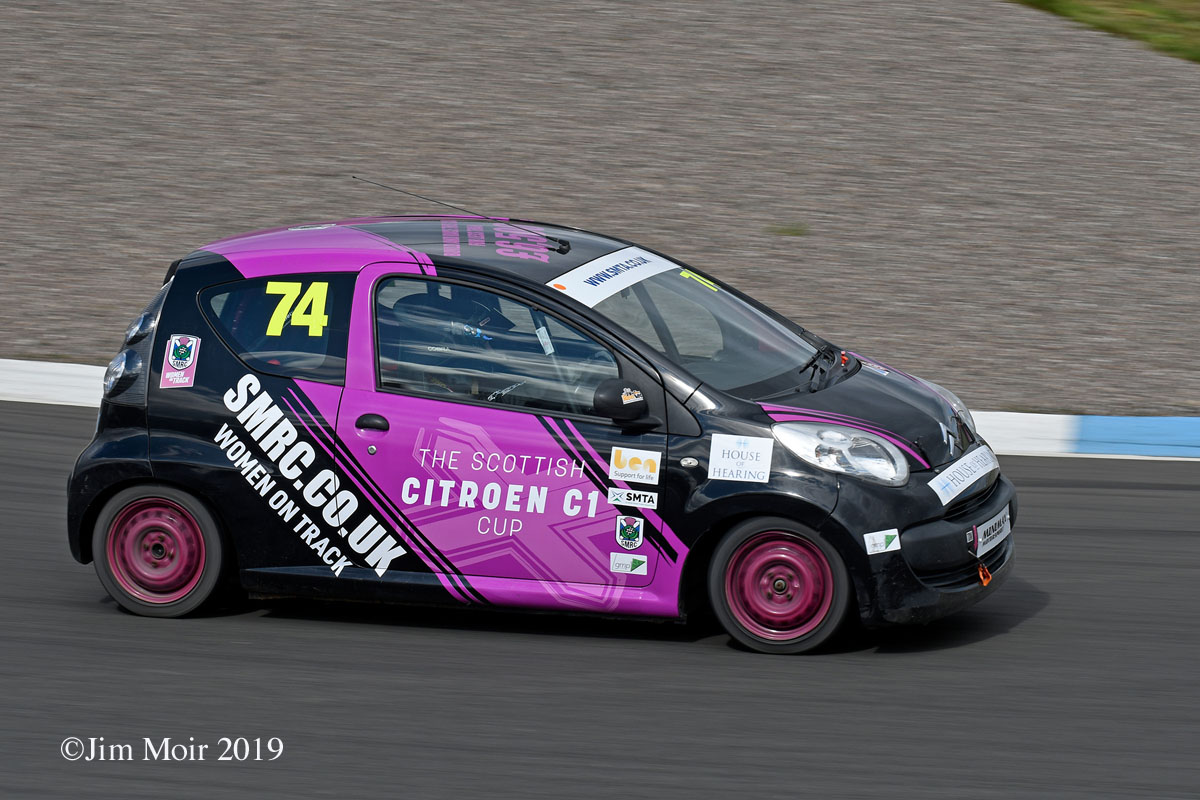 Scottish Legends Cars Championship had lots of frantic racing, and more overtaking than any other race, as their grids are dictated by a random draw in heats 1 & 2. Then in the Final the day’s top points scoring cars start at the back of the grid. Heat 1 saw a win for Commentator Duncan Vincent, who is a quick driver, from Dave Newall. Duncan led early on, then swapped places a couple of times with Dave Newall after a mid raced safety car period, before just holding on to win. Newall dropped to 3rd on lap 7 but in a late spurt passed Steve Whitelegg. Duncan also survived being hit from behind on lap 3 by Stewart Black, who went off backwards into the tyre barriers going down the hill. Duncan said, ‘ the car is on fire right now. Had to readjust my helmet after Stewart hit me, hope he’s okay. A cracking race and it’s a joy to race with Dave Newall and Steve Whitelegg’.  Heat 2 and the Final were both won by former multiple Scottish Legends Champion John Paterson, who hadn’t won a race since early last year. In heat 2 he led home Championship leader Steven McGill. Who led the first half of the race. In 3rd was Duncan Vincent after starting 13th though it only took him 4 laps to get 3rd, but by then he was 3 seconds down on the leaders.  By the flag he was just 2 car lengths behind McGill. While in the final Paterson passed 11 cars in the opening 2 laps to lead by McIntyres. He opened out another 3 second lead, which was 2 seconds at the flag as he beat Duncan Vincent, who set a new lap record in his chase up the order from the back of the 14 car field, with Steve Whitelegg a close  3rd. Though Steven McGill in 4th was over 5 seconds back. Defending Champion David Hunter had a quieter day with 4th, 6th and 7th placed finishes. 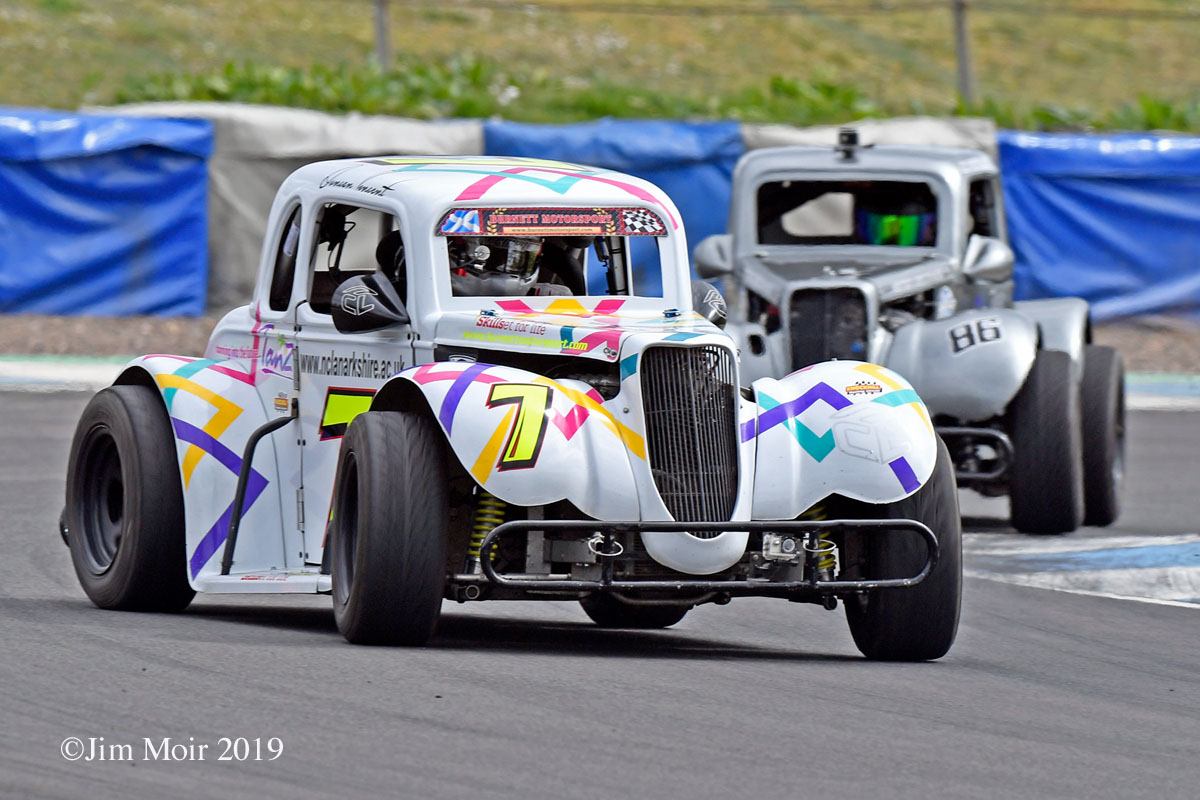 In Scottish Saloons and Sports Car Championship, it was two wins for former Champion Paul Brydon his new Scandinavian Touring Car; a BMW bodied space frame car, with a V6 Nissan engine. Paul is getting used to it and was the class of the field, as he set a new lap record in race 2. Race 1 Paul Rankin was 2nd in his Westfield kit car, well clear of defending champion William Robson’s Focus. While in race 2 Robert Drummond passed Rankin on lap 1 and held 2nd all the way in his Escort Cosworth, despite Rankin never being far away in 3rd. as less than a second separated them at the flag. Robson had mechanical woes from lap 2 and limped the Focus home in last place but scored valuable points. Brydon set a new lap record in race 2. 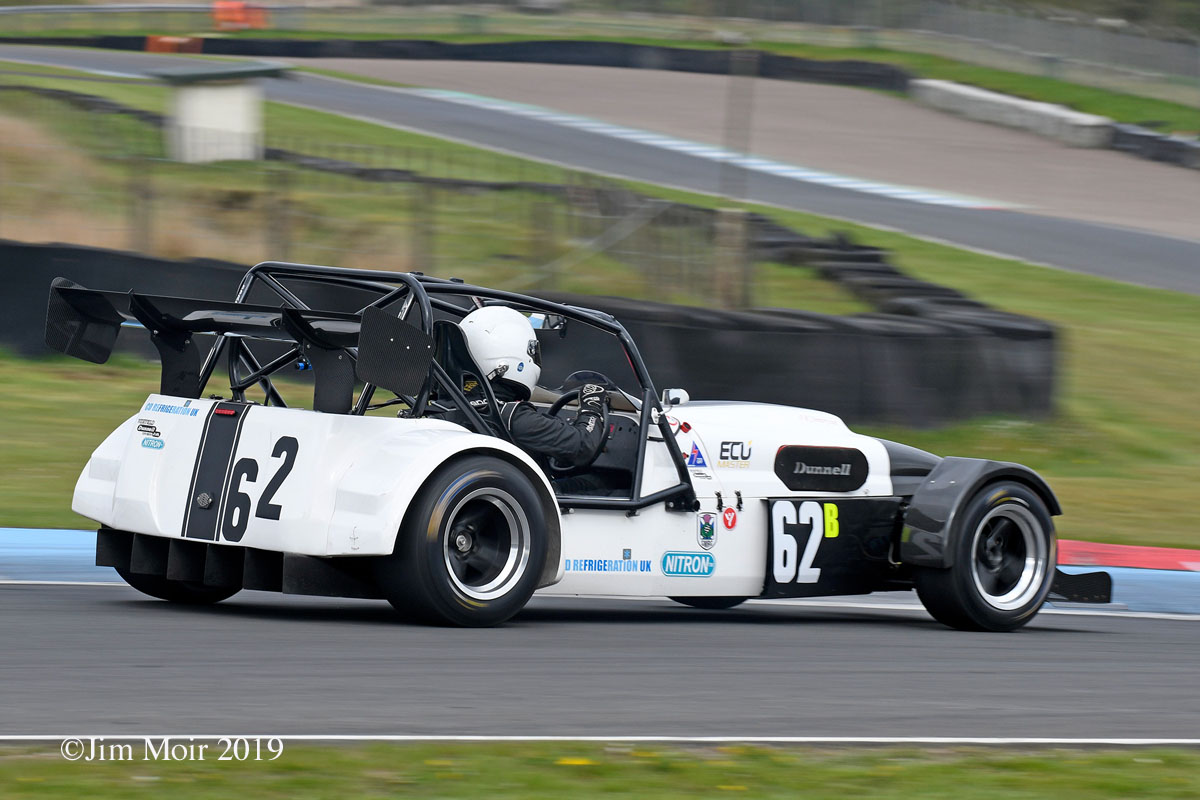 The Scottish Classic Sports and Saloons saw two tight leading battles. In race 1 defending Champion Alastair Baptie won in his nearly 50 year old MGB GT V8, after he passed Raymond Boyd’s Porsche 911 Turbo mid race at the hairpin. Baptie sat on Boyd’s tail from the start. John Kinmond held 3rd in his big Rover SD1 from the start until late on the last lap. He started having what looked like a rear tyre trouble, with smoke coming from a back wheel. He slowed from lap 11 and this let in Bruce Mitchell who grabbed 3rd in his Europa on the back straight with half a lap to go. In race 2 Boyd led all the way, with Baptie on his tail again. When Baptie tried an overtaking move going downhill into the hairpin on lap 9 of 12 he half spun, as Boyd defended. Then Boyd raced away to win. Baptie restarted, but cruised round and fell back. This promoted Kieron Baillie into 2nd in his Lotus 7 with Bruce Mitchell putting on a late spurt to grab 3rd with his Lotus Europa by inches from Ian Crehan’s Mazda MX5. Mitchell had spun at the hairpin mid race, dropped to 5th and fought back. William Conway took class A in his Mini in both races, which was quite fitting on the Mini tribute day. 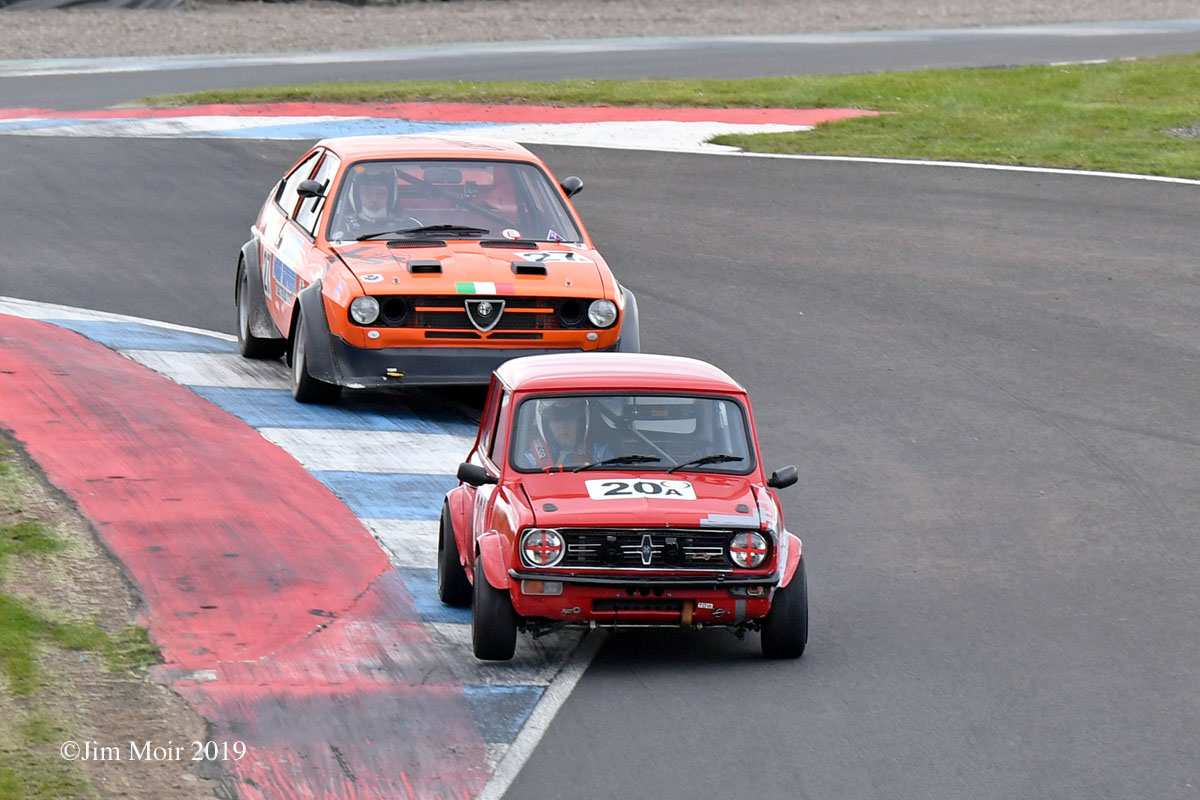 A good day at Knockhill, the next meeting at Knockhill is June 23rd on the clockwise track. In between then will be away rounds for Legends Cars at Angelsey in Wales on 25 and 26 May. But it’s to Kirkistown in Northern Ireland for the Celtic Speed Mini Cooper Cup on 25 May. The newly supported by Farmer Autocare, Fiesta ST Cup and Mini Cooper S Cup cars also go to Kirkistown on the same weekend.