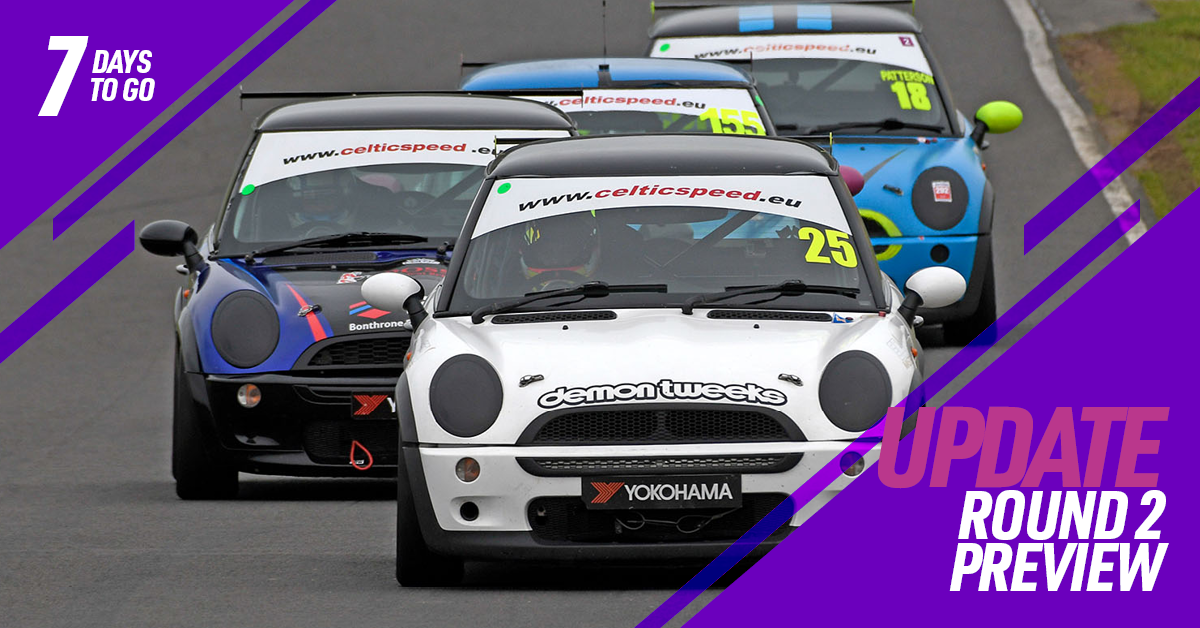 There’s only 1 week to go until the SMRC are back on track again at Knockhill Racing Circuit for Round 2 of this 2020 season. Sadly spectators are still not permitted in line with current government and Motorsport UK guidance. However, we will bring you all the action on the SMRC Facebook Pages, the website and be sure to listen to the SMRC Paddock Pass Podcast for the Round 2 Review on Monday the 12th of October.

Round 1 saw great action on track. In the Celtic Speed Mini Cooper Cup Robbie Dalgleish continued his 2019 form with 2 wins from 2 races – be sure to catch our exclusive interview with the reigning champ in our up and coming digital programme for Round 2. Chad Little is 2nd in the Championship 11 points behind Robbie. Newcomer Jamie Blake was the only Cooper S and won both races in his class.

There was a big field of cars and battling throughout the field. Alastair Baptie and Bruce Mitchell both have 50 points with Alastair in Class A and Bruce in Class B. There was great action between Andrew Smith in his Morgan +8 and John Kinmond in his V8 Rover SD1. You can read about this great car in our digital programme next week.

In the Fiestas there was good racing at the front with David Colville taking both wins and Steven Gray runner up on both occasions. Lorn Murray is 3rd in the Championship 10 points behind Steven.

The Micro Machines Racing duo were a force to be reckoned with at the first Round where drivers Colin Main and Ross Dunn scored a victory each and are tied at the top of the Championship. James McCracken from West College Scotland Motorsport Academy is 3rd in the Championship 15 points adrift.

We’ll keep you updated with all the action from Round 2 and hope to make you feel like you were there.

As always we hope you and your families are well.