On Sunday the club holds its final race meeting of the season. There are 14 races giving spectators and marshals over 6 hours of circuit action. On Sunday four Championships plus one Cup must be won. Five other Championships and cups were settled in September. Racing is from around 10 am until approximately 5 pm.

Its fast, action-packed, and anything can happen in Mini racing and often does. There are 3 races on Sunday with a maximum points score is 75. But this prestigious Championship is still to be won. Former Champion David Sleigh from Edinburgh is 13 points ahead of John Duncan, who led the title chase in September. These two divers have each won 3 races this year. In 3rd overall 52 points behind Sleigh is Robbie Dalgleish, a six times race winner this year he has closed the points gap and could still take the title, but the other two would need to score few points. So often the Minis are in 7 or 8 car groups all battling like crazy, and their last race of the day always features a reversed grid for the top finishers from race 2. To add to the drama the Ladies Cup is also still to be settled, as Ashley Morris leads 2017 winner Hannah Chapman by 22 points. 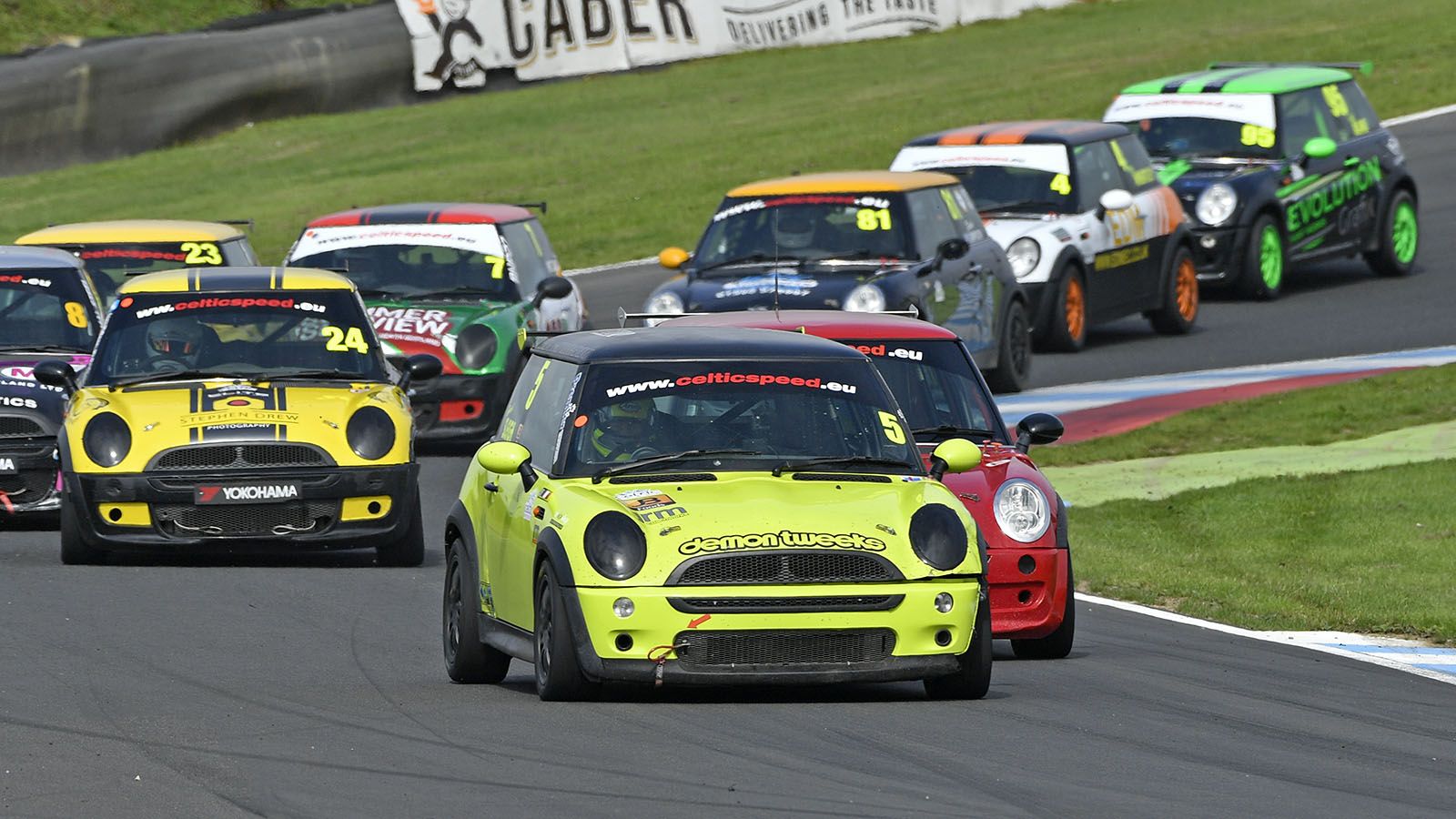 Lots of fabulous classic cars from the 60s, 70s and 80s, all being driven as they should. It is also a class-based Championship, so drivers score points in their class, so anyone in the 6 scoring classes can win the title. There are 3 drivers in with a chance of the title. Current Champion Alastair Baptie who races a Fiat X1/9 sportscar is just 3 points clear of former Champion Raymond Boyd in his Porsche 911 Turbo. Also in with a slim chance is Alfa Romeo Coupe driver Mario Ferrari. There is a good entry, including former Champion and multi-race winner Tommy Gilmartin in a Morgan Plus 8, and former single-seater champion Stuart Thorburn in his lovely Escort Twincam. 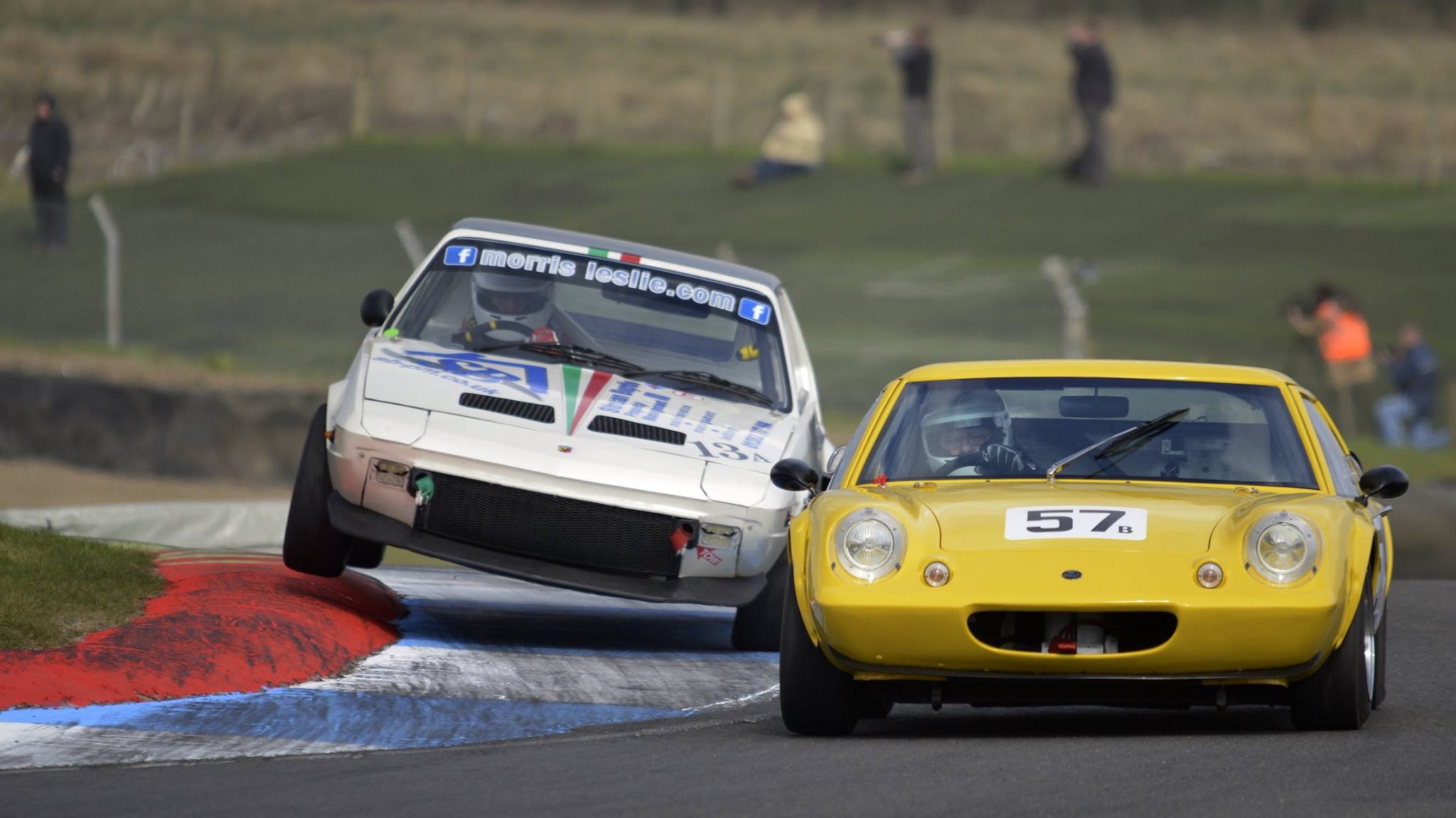 Baptie pushing to the limit.

The fastest cars entered this weekend will race in this Championship. It is also to be won, with defending champion William Robson 25 points ahead in his Ford Focus RS. His main rival is Paul Rankin is a Westfield kit car. They have two races and points are scored in their class, so class wins are important. Also entered is Robert Drummond with an Escort Cosworth who is one of the 8 race winners we’ve had this year, as variety is definitely the spice of life with these fast modified cars. Back for more is the double September race winner Andy Forrest in his very quick Westfield. There are also 5 Mini Cooper S Cup cars entered with Oliver Mortimer going for the clean sweep, having won this class in every race so far. 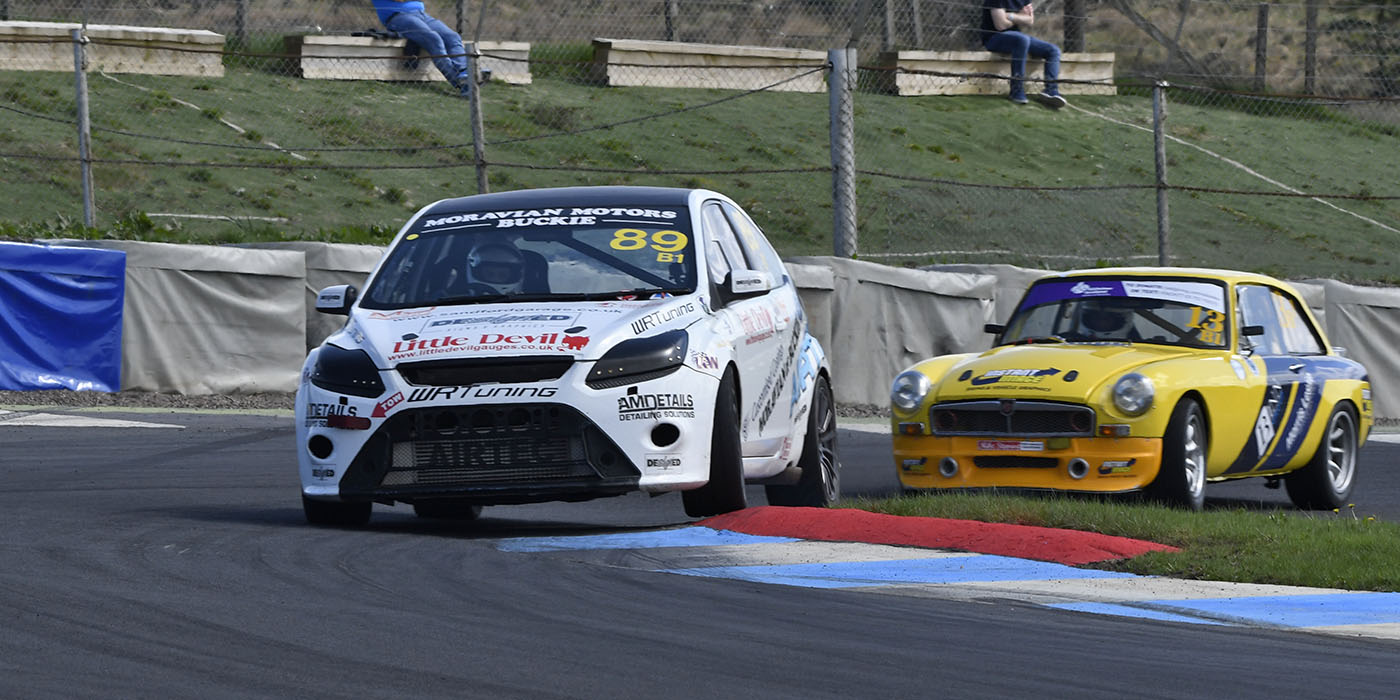 Robson looks to secure the title this weekend.

Known as pocket rockets these cars are small but quick, as they use 1250cc motorcycle engines. They have frantic races as their grids are drawn at random for the 2 heats, then in the final the top points scorers of the day start at the back of the rolling grid. There are 5 drivers in with a chance of the title. David Hunter is leading from Ryan McLeish and Ivor Greenwood. They have 3  races and so far 17 cars have entered. These races will be worth watching. 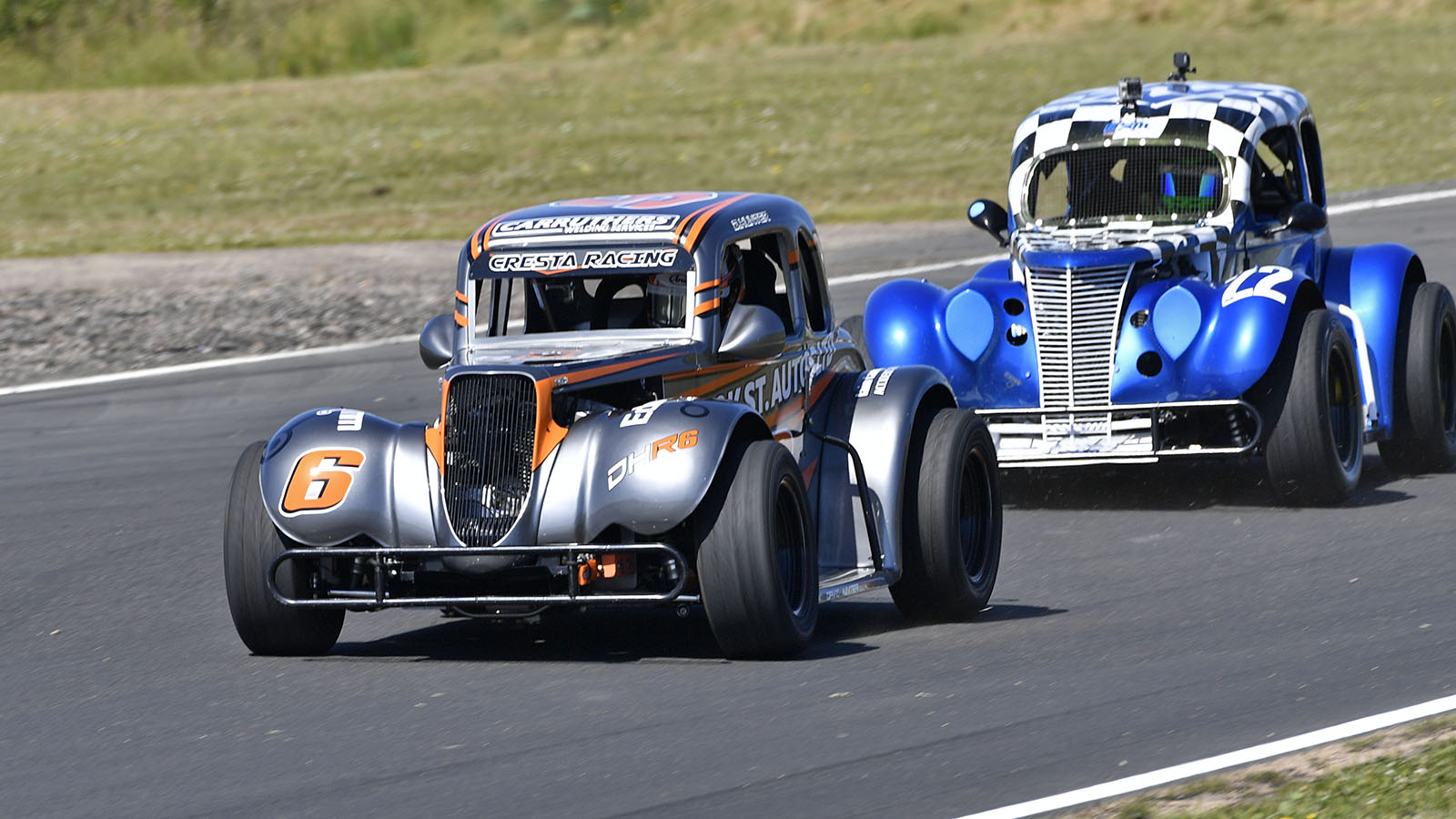 Can Ross Martin win the last two races and complete a terrific  100% championship record. He has won all but one race, but in that race he still took maximum points as the race winner was a non-scoring guest. Ross is a teenager with talent and this is his second single-seater title in 2 years. The runner up spot is still to be decided, so Sebastian Melrose will take on Jordan Gronkowski who trails him by 26 points. There are 2 races and the maximum score is 50 points, plus one point per race for fastest lap. Ross Martin has also won the prestigious Mazda Road to Indy prize, and will take part in an international ‘shootout’ with other champions later in the year to see who wins a year racing in the USA. 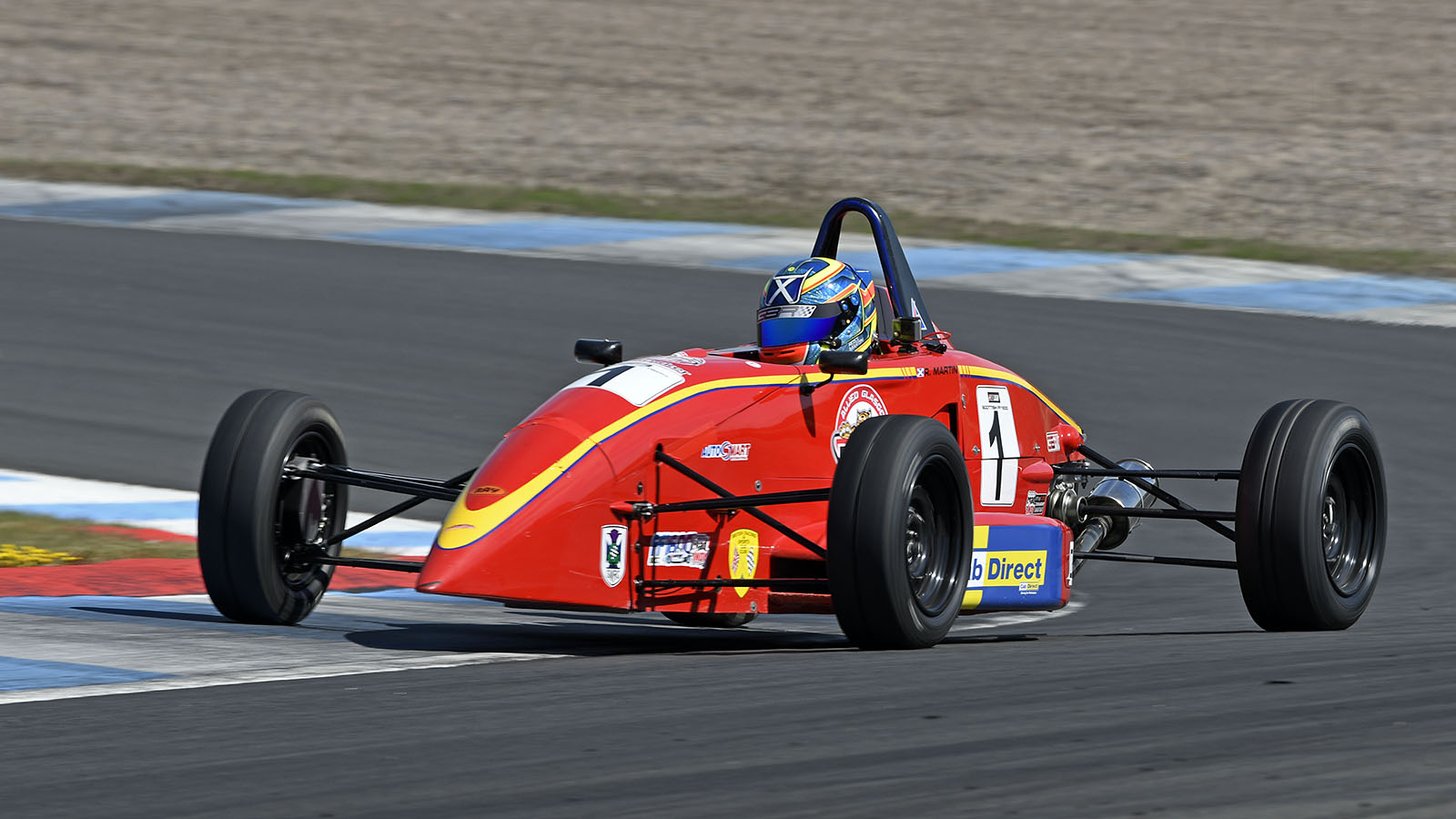 The ST Cup has been won by Wayne Macaulay as he retained his title. Blair Murdoch has taken the runner-up spot, but these cars still have close races and with the added interest of a Mini Cooper entered from Hot Hatches, and that should be on their pace. A couple of drivers racing might get a chance of a 1st win.  There is Stewart Scott who lies 3rd overall, while guest and current Mini Cooper champion Mark Geraghty is back, having taken two 2nds earlier in the year. 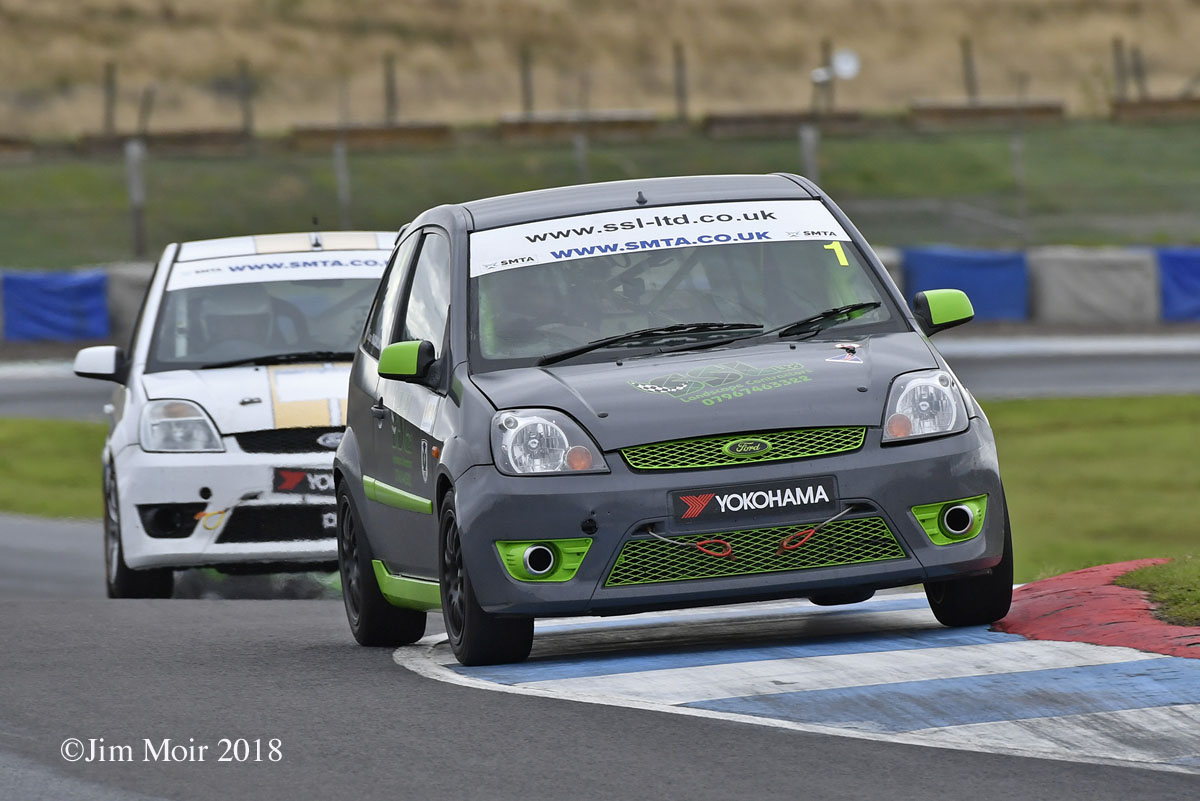 MacCaulay wrapped up the Fiesta title last time out

The circuit has an access road allowing spectators to go right round it and choose several good vantage points such as the final corner the hairpin or the first corner Duffus Dip. There are covered stands at 3 corners to let you watch the action from. At around 1pm there will be a grid walk. spectators can get up close to the Formula Ford single seaters at this meeting. Previous grid walks have been very popular and all you do is listen to the announcements regarding when the track can be visited.